I've always had immense faith in the pairing of Raj Kapoor and Nargis. Be it their high strung passion depicted in Awaara, their innocent love story in Shree 420, their likable romance in Aah or their adventurous affair in Chori Chori. In every single one of these cinematic delights, these two awesome actors have delivered. But, here is one film that took me absolutely by surprise. An obscure film, Anhonee is fantastic not just for its intriguing story and taut execution but also for the very different personalities that the two actors have in the film. Rajkumar Saxena is so pragmatic yet passionate, Roop is an honest and loving woman and Mohini is a crafty and impulsive revenge seeker. Three believable characters who make this 1952 film a captivating affair. After watching this griping drama, I can safely say that I've seen a good film after a long, long time... 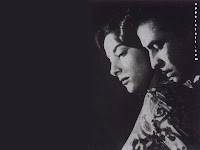 Considering that the film is crisp, I did feel that some of the jump cuts were a tad jarring. Some of the scenes hardly blended into the other, while some of the dialogues were too cryptic. But looking at the final product, I have no scope for complaints. The director wastes no time in redundant sub plots, his twists come bang on when least expected, there are no silly comic interludes (David and Agha are both good) and the songs take the story forward. In short, Anhonee is a smart surprise package from director Khwaja Ahmed Abbas. 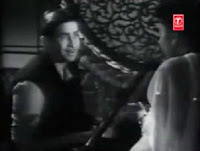 Roop (Nargis) is the daughter of the wealthy Thakur Mirza Sahib (Badri Prasad) who is a revered man in society for the good deeds he has done. One day, his tenant comes to complain to him that the house he lives in is in a shoddy state. This tenant happens to be the young and idealistic lawyer Rajkumar Saxena (Raj Kapoor). The thakur takes an instant liking for this young man and even approves of his match with his daughter. Roop, though initially disinterested in this strapping youngster, falls in love him gradually and responds to his overtures. I love Raj Kapoor's smouldering expressions in the song Main dil hoon ek armaan bhara (this is the first time I heard a song sung by Talat Mahmood. Yes, he is quite melodious). He seriously has a magnetic charm.

While the two are enjoying some romantic bliss, Rajkumar goes to Lucknow for his work and settles there. Soon, the thakur and Roop also settle in Lucknow. One fine day, Raj has a visitor who stuns him with her looks. She is the carbon copy of Roop but calls herself Mohini. From her mannerisms you get to know that she is a courtesan. Her body language is rather loud and she often uses risque humour. She appoints Rajkumar to fight a case for her. Rajkumar being a sensible man does not hide from Roop that he had an acquaintance with Mohini, who is seen as a fallen woman by society. When Thakur Mirza Sahib hears that Mohini shares the same visage as Roop, he suffers from a cardiac arrest and passes away. But before, breathing his last, he murmurs, "anhonee". Now this word is the key to all deep dark secrets.

Soon you come to know that Mohini is the illegitimate daughter of the thakur with Champa (a very young Achla Sachdev), a courtesan who he had an affair with. Seething with anger and hell bent on revenge, Mohini demands that she be given her due by Roop. The good and honest girl that she is, Roop readily agrees to share her property with Mohini, who she really feels has been wronged by fate. Mohini comes into Roop and Rajkumar's life but is not satisfied with just her share of the property. She has her eyes set on the handsome Rajkumar, who she has taken a fancy to. Though Raj hates her from the bottom  of his heart, Mohini tricks him often so that she can be close to him. She is scheming and lusty and wants Raj all to herself. 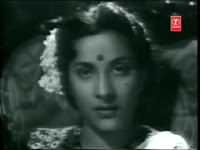 But Rajkumar loves only Roop and will have nothing to do with her sister. But then, everyone is a vistim of his circumstance and fate definitely has things ready for everybody. So, this triangle does attain very interesting colours. With no moments wasted, Abbas makes this tale rather strong, unique and gripping. He uses awesome makeup, great camera moments and a dexterous play of light and shade to depict the storm brewing in the lives of these three persons. He brings in Laddan (Om Prakash), the vile blackmailer to spice up things and music director Roshan throws in a handful of good songs to impress. The ending is pacy, fast, dramatic yet totally credible... Watch this for sure... 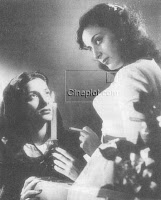 Nargis takes the cake in this film. Balancing her dual roles, she proves her mettle in every scene. Be it the lovable and mild Roop, who is too dignified to let stigma taint her father's honour, or the wicked Mohini who can go to great heights to get what she wants, Nargis is flawless in Anhonee. Her delivery as Roop has as much dignity as the crassness she carries herself with as Mohini. I feel Abbas is rather bold in showing his lead actress puffing away at those 555 cigarettes. Nargis's Mohini wears very modern cholis and is not shy when it comes to wearing her heart on her sleeves. She is lusting after Rajkumar and will kill anyone in the way to get him. She will lie, rob and fool. It's only in the last scene that you see circumstances taking the better of her, when she resigns to her fate. Her spunk is missing and her revenge drive loses steam. But then, what other ending could be better? I cannot think of anything else...
As Roop, Nargis hence, tends to be a bit boring. In fact, she also cannot match up to the charm of her lover. She is too dutiful and sacrificing. Her romance also misses the spark. Sometimes you might feel that Mohini is taking the bone away from under Roop's nose...
There is a Lata Mangeshkar song in the film called Zindagi badli. It's amazing how the music man has juxtaposed sad strains along with the happy notes in this. While Mohini is thrilled about how her life is shaping up, Roop is crestfallen for her share of sorrow.

Raj Kapoor is a very different man here. I say different because he plays his role with utmost restraint. Devoid of his signature mannerisms, Raj's Rajkumar is a measured portrayal by this attractive actor. Yes, attractive. It's 1952 and the showman looks good enough to eat. He is a dashing lawyer and an intense romantic. His smile is killing and his eyes are fabulous. Hence, it's no coincidence that both the ladies in his life are ready to give up their lives for him...
Posted by Sharmi Adhikary at 10:35