All Pomp and no Show... Padmaavat in my nutshell... 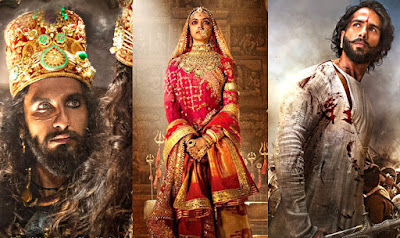 How many of you have watched Mirch Masala? A Ketan Mehta drama set against the arid Rann where the protagonist, Sonbai, becomes the subject of lust for the lecherous Subedar, who is essentially a Company appointed stooge. While he leaves no stone unturned to get his kill, the director makes the tale even more riveting showcasing why exactly the women of the village back Sonbai up, bolstered by their own sense of honour and pride. Eventually they fight back the villain in their own way, while the men of the village, who would rather have their women cloistered in their homes under the ghunghat than be forthcoming with their opinions, stand and watch.

The film is a stark depiction of the societal situation in the village, the patriarchal mindset and the state of women. Even if I do not delve on these, the film aught to be celebrated just for the superlative screenplay, mindblowing cinematography and of course the performances. Smita Patil oozes sex appeal that is rustic yet feisty, Naseeruddin Shah epitomises deviousness and Suresh Oberoi, though absolutely hateful, looks the authoritative man of the house to the tee. 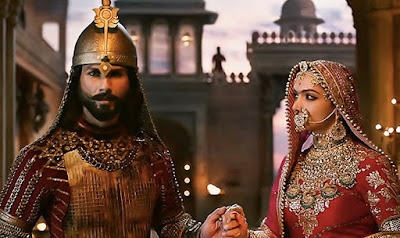 Films cannot and should not be compared. Especially when the milieu in which they are made is different. But as I watched Padmaavat this evening I couldn’t help remembering the aforementioned film. Because even though the class depicted in the current one is monarchy, the topography and demography dealt with is somewhat similar to the former. There is a blaring reference to the mirchi throwing scene that is so lauded in the intellectual corridors of cinema. The villain’s urgency to get his catch is etched in the eyes of Ranveer Singh. But still Padmavat is no Mirch Masala. It didn’t stay with me.
Here’s why. Sanjay Leela Bhansali, known for his yen for larger-than-life canvases, miscast his male lead. With that diminutive frame Shahid Kapoor cannot pull off a Maharawal Ratan Singh. He is short, very short (and looks even more so beside the tall Deepika) and extremely lean. Rajput men are known for their height, broad shoulders and robust appearance. No matter how much the camera shines on his slick abs, those shoulders are not wide enough to do justice to the fabulous attire Rimple and Harpreet Narula gave him. He pales in comparison to the thumping personality and gait of Ranveer. I’m also wondering why he walks around with fairly one expression plastered on his face: BLANK. When he is romancing he’s blank, when he’s strategizing he’s blank and when he’s imprisoned, he’s blank. His character is unidimensional (why didn't he interact with his first wife in the entire length of the film?) What happened to the 'real' Shahid Kapoor. The actor who floored with his effortless act in Kaminey and his spellbinding art in Haider. Don’t tell me he only reserves his best for Vishal Bhardwaj… 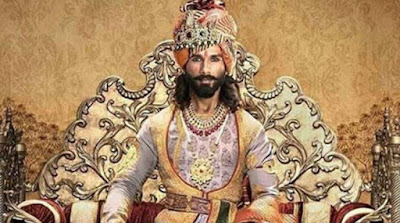 I’m not much of a Deepika Padukone fan. Yes, she is pretty and that’s about it. She looks lovely but I kept thinking of the ethereal Aishwariya in Jodhaa Akbar. Her dialogue delivery is so stunted and jaded. Her chemistry with Shahid is bland and cold. This time somehow the director thought that the unibrow and the tears would salvage the situation. No, they don’t. I’d prefer an enigmatic Sonbai any day.
The cinematography also is a bit restricting (Bhansali has mostly used dull grey tones, last seen in his Harry Potteresque Saawariya). While it might be a conscious decision to keep the mood dark and dreary in sync with the foreboding nature of the plot, I wanted my eyes to be blown over by the length and breadth of what I witnessed on the screen. Heavily borrowed from Troy (mainly the last duel and the thousand ships image), even the war scenes were abrupt, giving no room for panoramic action sequences. While the sound design is spot on, the want of horizontal frames makes the architecture look constricted. I missed the expanse of Hum Dil Chuke Sanam. I kept asking for explanations that would justify the decisions of the king and the queen. The plot demands that. Like when he says Rajputs honour dignity and the word given with their life, there should have been little instances and nuggets to bolster that. Small snippets that would balance the heavy words. Maybe then all the heavy breathing in the lengthy drama would not sound lofty. One needs to support the heart with the lungs, right?
While the film is a chain of actions and reactions, I'm still wondering why the royal priest was prying into the private chambers of the royal couple? The script doesn't account for that even for a second... 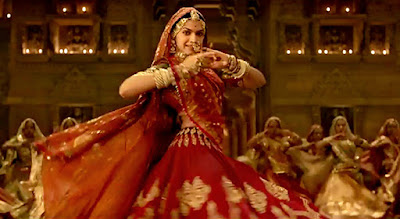 There were redeeming factors though. The costumes by Rimple and Harpreet. This couple has come of age. I say this because I have seen their work over the years. While Deepika’s and Shahid’s costumes were opulent and colourful, just as royals should be wearing, they poured their heart out for Khilji’s look. Dark colours that reflect the depraved and barbaric soul of the Sultan. Layers that project his intriguing personality. I don’t think it could have been better done.
Ghoomar is absolutely fantastic. It is rhythmic, folksy and picturised stunningly. Apart from that one, I don’t think the music is even worth applauding with some songs being completely redundant.
Ranveer does what Shahid could, but would not. He pulls you in with his eyes. His barbarism, 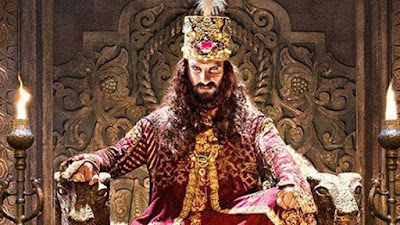 diabolic nature is mirrored in his eyes. The deep dark recesses of his treacherous heart seeps out from his piercing gaze. It’s mesmerising how this lad has grown. Though some of his physical outbursts were exaggerated, I could feel the rush of his passion towards the denouement. His win came through treachery and deceit because he wanted it so badly and he justifies it to the king. His disturbing ambition is too palpable. Like in the scene where he waits out on the barren land all through the night for Padmavati to step out of the walled city of Chittor. When she doesn’t he firms up his resolve to get what his heart desires for. Ranveer was symptomatic of passion. Passion for the woman, passion for the win and the passion to project his art like never before.


And while I watched Ranveer trying to save the drab insipid saga singlehandedly, I kept wondering when and where exactly in his career did Sanjay Leela Bhansali loose the plot…
Posted by Sharmi Adhikary at 10:11 6 comments