Honesty is the best policy, or so they say... (Shakha Proshakha)

Malhar is sleeping right now. So, I've tiptoed out of the room to write a post, while his grandparents stare lovingly at him. I might add that in his sleep, Malhar smiles and makes various expressions! Of them, his gummy grin and his pouts are the cutest. He also stretches a lot and wakes up accidentally because of that. And then he yells so that I run and lull him back to sleep. Who will make him understand that if he stretches so much, he is bound to wake up...  And I think he snores, and even sometimes neighs like a horse!!
Okay, before all that stretching and pouting and stretching pull me back, here's a bit on one of Satyajit Ray's brilliant works on the juxtaposition between honesty and corruption... 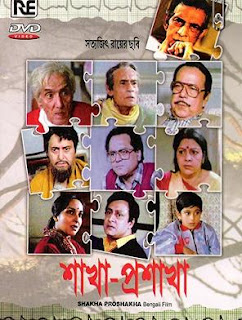 Shakha Proshakha, made in 1990, is bang on target right from the very beginning. Ananda Majumdar (Ajit Banerjee) is a retired industrialist and a venerated man in society. On his 70th birthday he is shown to have a long conversation with his second son, Proshanto (Soumitra Chatterjee), who used to be a brilliant student with a bright future, before a cruel accident snatched away all his prospects.