I had watched Aruna Vikas's Shaque as a young teenager. Considering that I am blessed with a 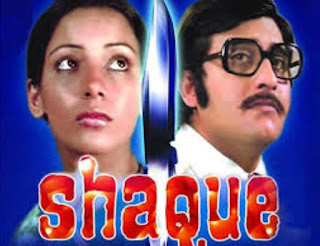 remarkable memory, I didn't really forget the plot and the characters but when I watched it yesterday I realised that my reaction to the film had undergone quite some change. The first viewing was accompanied by my father's incessant appreciation of Utpal Dutt, who plays a unique role in the film. With his commentary I ended up believing that it is a perfect suspense thriller with able performances not only by Dutt but also by the protagonists Vinod Khanna and Shabana Azmi. Understandably this teenager's impression was a tad coloured.
This time the commentary was absent. Hence, I watched the film from top to toe and realised that while the plot is fantastic, the music is apt to build up the suspense, Utpal Dutt is cut out for the role of Maan Singh, it is Vinod Khanna and Shabana Azmi who fail to grasp my attention. Both are so inconsistent in the film, to the extent of 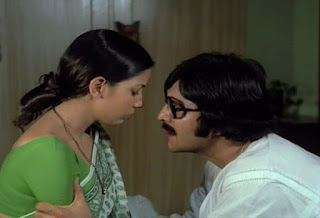 being disinterested. Vinod Khanna's acting skills I'm not too sure of, but I know Shabana can own the screen. Here she does not. Maybe that's why Shaque for me isn't the perfect suspense thriller...
Meena Joshi receives an curious letter from some Maan Singh, while her husband, Vinod Joshi is away for work. The letter alleges that Vinod had murdered Kale after stealing money from his office and put the blame on the innocent Subramanium. The author also alleges that the Joshis' sudden rise to riches was because of that stolen money and that Vinod is actually a scheming fellow who has planned the misdeed. Meena's halcyon world comes crashing down. While she refuses to believe what the letter says, she keeps questioning Vinod's sudden contact with so much money. Eventually Vinod finds out that Meena is suspecting him and though he tells her that he earned all the property through his dealings in the share market, Meena takes it all in with a pinch of salt.

For a film that's primarily focussing on the clash of principles between an indignant father and a self-respecting son, Hrishikesh Mukherjee's Alaap takes a winding route in building up the story. It's evenAbhimaan and Jurmana. In this film a good story is somewhere let down by the circuitous execution.

more strange because Mukherjee is at the helm of affairs here. But there is so much redundancy in the beginning before the actual plot unfolds, that you wonder whether this is the same director who knit solid tales like
Advocate Triloki Prasad is a widowed man who prides himself on the position he holds in society. He's rich, venerated and hence, doesn't mince words belittling the interest in music that his younger son, Alok, has. It's a very straight-jacketed thought process. If you have studied in college and earned degree, you give up all artistic pursuits and get down to brass tacks. A knack or a yen for the arts isn't really appreciated in Triloki Prasad's universe. He forces Alok to take serious interest in work, which entails going with Ashok, his elder brother, to the court and pick up the ropes in the industry of law.

Very few directors could spin an engrossing tale like Hrishikesh Mukherjee. Especially with incidents  that on hindsight appear inconsequential. Like in Jurmana (1979), a juvenile challenge between two friends changes the course of lives for so many near them. It reveals character flaws, misunderstandings and ultimately you have to wait up and see what happens in the end. This is the mark of a great story teller, which Mukherjee undoubtedly was. 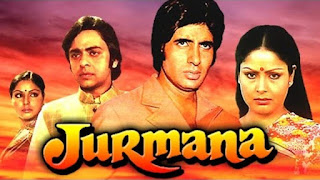 He also created the most unique characters for Amitabh Bachchan. I feel Bachchan got to toy with a veritable array of personas only in Mukherjee's films. Even in Jurmana, the actor gets to portray a challenging role. He puts his heart and soul into Inder and makes him easy to hate first and eventually fit for pardon. Grey to the hilt, Inder turns out way too interesting to neglect.
Inder Saxena (Amitabh Bachchan) is a rich businessman, disillusioned with women courtesy a cruel 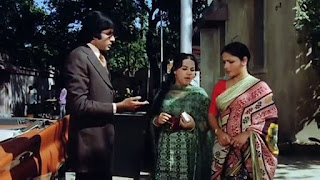 act by the woman who he was once supposed to marry. Treating women like commodities, when Inder first notices Rama (Rakhee) in the quiet lanes of Pratapgarh, he only wants to bed her. Despite being warned by his childhood buddy Prashant (Vinod Mehra) that she is made of sterner stuff, he tries every trick up his sleeve to melt her heart. What Inder does not realise is that the girl actually falls in love with him never suspecting his lecherously odious intention.

I was trekking to Gurgaon the other day from Noida, where I live. For the uninitiated, let me tell you, 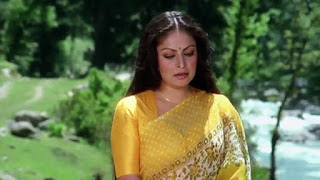 that's like crossing two states!
The distance is a crawl, and a sapping one at that. Daily commuters from Noida to Gurgaon will relate to the grief I go through during such occasion arises. But, thank heavens for FM radio, which makes the journey a wee bit pleasant.
The moment I got into the car Lata Mangeshkar's Aeri pawan dhunde kise tera mann transformed me into a reverie. It's such a beautiful song. After enjoying the rendition, I quickly googled the song, traced the film and after reading the gist was piqued to watch it. All I can say is that I did not live to regret the decision. 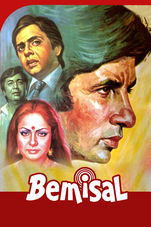 Hrishikesh Mukherjee's Bemisal (1982) is an engaging drama of human relations bordering on greed and benevolence. But what I loved most was the character sketched for Amitabh Bachchan. While from afar he appears an affable, happy-go-lucky doctor, his personality is far more intriguing and charismatic than the others in the film. And it is laced with a deep sense of magnanimity influenced by the benevolence he was gifted with when times were far from favourable. His regard for those who helped him out never diminishes and his sense of duty is unparalleled. The crests and troughs of his journey is worth graphing. Dr Sudhir Roy's actions make the film so believable. Despite the tardy subplot of Ruby Dutt.
Dr Sudhir Roy, a child specialist, and Dr Prashant Chaturvedi (Vinod Mehra), a gynecologist, have been brought up by an advocate. Sudhir never ignores the fact that the rich advocate saved him from a deplorable life by adopting him and giving him a steady upbringing and education. For that he remains forever indebted. Hence, when it comes to abdicating the woman who he is attracted to for the sake of his foster brother, he doesn't waste a moment before making the sacrifice. Even though he can gauge that Kavita (Rakhee) might be more keen to marry him, he owns up his murky past to dissuade her. But more importantly he implores her to marry Prashant because that would make him happy.

I am not equipped enough to pen a critique on the dance of democracy depicted in Amit Masurkar's Newton. I agree that the sharpness and sarcasm is on point. The director has illustrated the truth with much ardour, albeit with a restraint that only veteran filmmakers showcase. The starkness of the plot, the realism is something that Masurkar should be lauded for. Absolutely riveting throughout, it's not for nothing that this effort is being applauded. As my heart lets out a silent cry of joy for the entire team of Newton, I can only wish and pray that this director's edge is never smudged. May he keep churning out such brilliance. For God knows, we need them.

But I do not want to deal with the politics in the film. The critics have done ample of that. I'll focus on human portraiture in the story. It was a rare study of the ideals constructing personalities. These beliefs are nurtured under certain circumstances, but events influence change. The film is a beautiful study of this balance of virtues and ideals and how they slowly transform with time and tide.