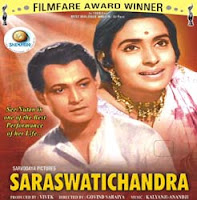 It's very difficult for me to accept an ending that looks absolutely redundant. I end up feeling why couldn't the director be more brave and experimentative. Why couldn't he marry off a widow to her true sweetheart? Why does he have to depict her accepting her sad fate and the decisions of a taboo-ridden society? And, why on earth does he have to make the lead character procrastinate so much??? Questions, questions, questions...

There is many a time during the running of Govind Saraiya's Saraswatichandra that I feel that at last the erudite lead and Kumud will be united. In fact, there are plenty of reasons for this. But Hindi cinema has hardly ever been straightforward and easy. The writer will definitely discover twists that suddenly look too necessary for the plot to go on. In this 1968 film's case, Saraswatichandra's (I'll call him Chandra) father and vile stepmother come into the way of his happiness. 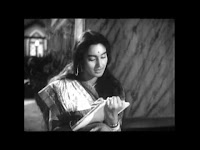 The film starts cleverly. Instead of stretching the length of the film with the depiction of incidents that lead to Chandra's indifferent upbringing, an anthem-ish song narrates his misfortunes. He is brought up under the 'neglect' of his stepmother and thus feels more comfortable serving society. This love for service does not foster in him an urge for domesticity. Even though he is engaged to a beautiful woman called Kumud, Chandra reverts awkwardly when she sends him his first love letter. This is the first sign for me. A man who takes time to realise what love is and react to his carnal desires will only have to wait endlessly for conjugal bliss. 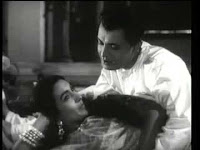 The high point of the much-awaited union of Saraswati and Kumud is the song Chandan sa badan, a fantastically sensual number, depicting the true intensity of Chandra's love and attraction for Kumud. What a wonderful way of starting a song! Kumud's dupatta is teasingly held by Chandra and she, swept with shyness, submerges herself in the lotus pond. It's as if she is trying to pacify the flames of her youthful desires in the serenity of the water. A mellow yet sensuous song that only clarifies the intense attraction between the two young lovers. And, surprisingly Mukesh's rendition is quite magical!
With so much love Chandra just waits for his nuptials to take place. The listless lover is too joyous to notice that his evil stepmother is instigating his father against him. But then, if I may ask, why does Chandra have to abdicate everything and leave? He should have stood his ground and recognised his duties towards his beloved. But then, what would have happened of this tale if he would have done so...

Kumud gets married to Pramad (Ramesh Deo), a drunk debauchee who is also illiterate. Not the prefect partner she would like to have. The story starts dragging from here. The girl who forced the staunch Chandra to feel her love loses her spunk after marriage. But then, she is sad and is resigned to her fate. She has to suffer because Chandra and the society wronged her. I'd preferred if she would faced her wrong husband like a tigress instead of grovelling before him. There are times when she is shown to browse through the letters that Chandra wrote to her. It is only later when Chandra comes to see how she is in her in-laws' house, that she burns them. She should have done that before. Why remember and respect a man who left her for all the silly reasons. Not convincing at all. The film is replete with more such inane errors. 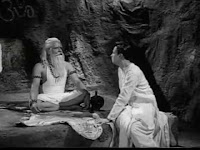 There are numerous occasions when  Kumud and Chandra could have united. Also, there are times when Chandra tries to convince Kumud that they are destined to be together. And, when Kumud's subconscious actually accepts Chandra as her lover and the only man who she can love, I start crossing my fingers. I want them to get married. I want the taboos broken, I want the untried tried and I want a happy ending. I also nod in acquiescence when Kumud's guardians want her to be happy with Chandra. With so much working for the lead pair, why on earth does everything go wrong?
Why couldn't Kumud take care of her infant brother-in-law as Chandra's wife? Why wasn't she brave enough to listen to the call of her heart? Why did she have to resign to what the society decided for her? And, why spoil three lives when two people could seriously have been very happy?
Saraswatichandra is a safe social drama that should have been christened Kumud, keeping in mind the actions of this girl. After all, when the end credits roll, everyone is lauding her sacrifice and the accomplishment of her duties. So, why on earth is the film dedicated to the man in her life?
I'm not convinced by the film. I know it is a safe bet, but I was expecting a different romance that would stay on with me. I wanted a unique ending, something that would leave an indelible mark. Something that would make Nutan as sparkling as she was in her other films. 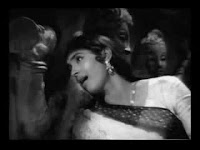 Here, I'd like to add that Nutan hardly looked as charming. Right, it was 1968. But, the lens makes her look too old and jaded. She looks heavy in the Garba number, Main toh bhool chali babul ka des and not quite lovely in her rendition of Chandan sa badan. I'm used to a more beautiful Nutan.
I am new to Manish. So, all that I can say is that he was a bit stiff. He looks good but requires more finesse in those emotional scenes. His character is one of restraint. He was remarkable in the romantic number and I'd have really loved him without his hideous wig.
The high point of this last black and white film is the music. Kalyanji Anandji's score is stunning. All the songs stand out. Especially Phool tumhe bheja hain khat mein and Chandan sa badan, the latter a sensual number that is gorgeous, strong and extremely beautiful... It momentarily lifts the film to an ecstatic high, only to fall soon after...
Posted by Sharmi Adhikary at 06:01