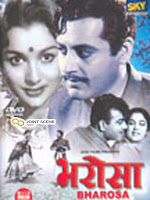 This films stands solely on its story. It's engaging, freewheeling and full of attractive moments. Even though a bit melodramatic, like all K Shankar classics, Bharosa is very believable and in parts funny. And yes, it has Kanhaiyalal, the Parsi actor who made every role his second skin. Here, as the scheming foster father, Kanhaiyalal is a revelation. He enthralls, extracts irritation and giggles at the same time. An apt instance of a brilliant character actor!!

Then you have the charm of Asha Parekh and her lithe dances. As Gomti, she is a charming village belle who is innocent and naughty, but determined to not marry anyone else but the person she loves. She is a perfect foil to Guru Dutt's Bansi, who at times looks a bit goofy and unassuming. And yes, she does cover up for his two left feet. Guru Dutt is as bad a dancer as Asha Parekh is good. So, in the dance sequences she more than makes up for the lack of rhythm in her costar. Yes, K Shankar uses her grace to optimum use. Even in her charade as a young boy, she is sparkles. But then, I've always had faith in this talented woman...
Bharosa's story is very easy to understand. You will also know that in the end all the wicked parties will be punished and good will prevail over evil. It is the journey to the end that keeps one hooked.
Ramdas (Shivraj) is a well-to-do and trusting individual. When he suffers from consumption, he leaves his only child under the care of his helper Raunak Lal (Kanhaiyalal) to go for his treatment. Ramdas tells Raunak Lal to take care of the boy like his own child and even gives him a hefty amount for his boy's education. The father expresses his wish of making Bansi (the boy) a doctor to Raunak Lal's wife, Laxmi. Saying this he leaves the three.
The moment the master is gone, Raunak shows his true colours. He takes his foster child and Laxmi and goes to his village. He uses the money to buy a house and in the education of his own son, Deepak. Bansi is never cared for and is made to do all the menial jobs in the house. The only person who loves himis Laxmi. Bansi grows up to be a very unassuming and quiet lad, always apprehensive of his father. He loves his parents but cannot understand why they treat him in this lackadaisical manner. He is a hardworking farmer, while Raunak makes Deepak (Sudesh Kumar) a doctor. But Deepak is hardly a doctor. He too has fooled his parents and squandered all the money that his father put into his education. In short, he has learnt well from his cunning father. 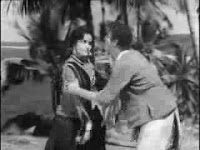 Bansi's sweetheart is Gomti, a lovely village girl whose father promises her hand to Deepak when Raunak sweettalks him into the alliance. But Gomti is not aware of this. She happily spends time with Bansi and sings some lovely songs (the music by Ravi is quite good) such as Aaj ki mulaqat bas itni  and Yeh jhukey jhukey naina. 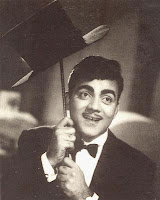 Deepak goes to the city and befriends a liar and a fraud called Platform MPPS (Mehmood in a hilarious role) who helps him to get acquainted with a rich businessman called Daulatram ( Om Prakash) and his daughter. Both the lads fool Daulatram and make him believe that Deepak is the scion of a extremely wealthy man residing abroad. Happy that he has got the right match for his daughter, Daulatram fixes her marriage with Deepak. Now, this Daulatram is also the landlord at the village where Raunak Lal resides. When Raunak visits his son in the city he is shocked to see that his son is mingling with his master so freely. Grabbing the opportunity to earn some quick bucks and secure the future of his son (and thereby his entire family) Raunak Lal keeps mum about the true identity of Deepak. And soon, thanks to all the misunderstandings Deepak and Daulatram's daughter get married. 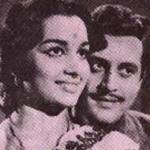 Back in the village, Gomti's father, Shivcharan (Nana Palsikar) is heartbroken that Gomti is not ready to marry Deepak and she has pledged herself to Bansi. He tries to reason with her but she is adamant. Raunak Lal sees this as a big chance to wriggle out of the sticky situation and dupes Shivcharan to sign off his property to Raunak. He tells Shivcharan that since Gomti has taken back her word to marry Deepak, his family honour is in jeopardy. Meanwhile Bansi is asked to leave by Raunak, much to his sorrow. He is aghast to hear that Raunak and Laxmi are not his own parents. He leaves the village and goes off to the city breaking all vows given to Gomti. But this girl is no mean fish. She follows him to the city under the belief that she is the one he loves...
So now almost everyone is a mess courtesy Raunak Lal's tricks, the drama shifts to the urban sphere. Here there is more drama, but of a different proportion. The fun only multiplies with the introduction of Shobha Khote (she plays a unique double role and is called Double Roti) and Mehmood... They share an awesome chemistry as lovebirds. 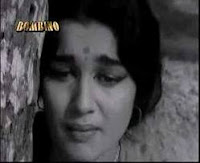 The entire cast of this 1963 film is crackling. Om Prakash is fabulous, as is Nana Palsikar. Mehmood is funny and Shubha Khote is pretty. Lalita Pawar (Dhanno) is a miscast for her histrionic capacities are hardly exploited. Guru Dutt plays his part pretty well. He is supposed to be the good natured son and till the end he retains his holier-than-thou avatar.
It is Asha Parekh who manages to stand out in the crowd. She displays a range of emotions. Is funny, dramatic, lovable and quite attractive. In the song Woh dil Kahaan se lau, she does look grief stricken at being away from her lover. And in the garb of a young boy at Double Roti's restaurant she looks really innocent and very, very young. 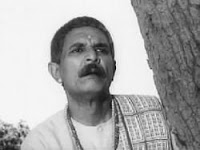 But, the man who manages to regale with his acting is Kanhaiyalal. He is a marvellous character actor. A  fascinating artist, Kanhaiyalal's Raunak tweaks every situation to his advantage without even bothering to think about anyone else. It is only money that melts him. Throughout the length of the film he does every mean thing that a man can possibley do. He is a wierd weasel in the true sense of the term. Even in the last sequences, you might start believing that Raunak is back to business again. Such is the surprise element in the part of this actor. Such is his mastery, so flawless is his performance...
Posted by Sharmi Adhikary at 06:04