Prefer the remake... a bit more (Kangan vs Uljhan) 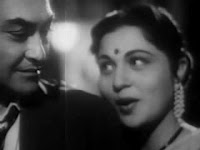 When I watched Nanabhai Bhatt's Kangan a few months back, I quite liked it. Though the narrative ran a tad slow, it had the elements of an engrossing mystery. The best part was Nirupa Roy starring as the female lead. She really was a pretty sight and played her part well. I never liked Ashok Kumar as a male lead so here too I was noncommittal. But the main thing was the story. It was a gripping mystery that hooked me to the very end.

The other day, I watched Raghunath Jhalani's Uljhan. And wonder of wonders, it was a remake of the 1959 film. The story was absolutely same but the treatment, I might add, was better. Not that the old one was bad, but the remake had everything in place. The cast was fabulous and the 1975 film ran fast. Which means it's even more engrossing. 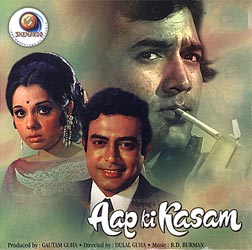 Now tell me something: Why is everyone in Aap ki Kasam losing sleep over how to exonerate Kamal? Why are they so driven towards showing him sympathy? Does he really deserve any? An insecure and stupid man who brings nothing but unhappiness to everyone around him, Kamal should have just been ignored and allowed to live his life the way he wanted to. I sound harsh, but please, after what he does, I feel he deserved nothing but that...

A girl to woman transition (Samapti)

There's something about Satyajit Ray's Samapti that is bound to touch the chords of a woman's heart. The last movie in the Teen Konya series (Postmaster, the first, is a superlative endeavour to project a young girl's isolation; Monihara however, is the weak link) is a brilliant romance carrying with it the whiff of rural Bengal. But even amidst all the intricacies of the human relationships heavy on the love quotient, there lies a subtle take on how a young tomboy grows and matures into a complete woman who recognises the significance of love in her life. Call it a story of evolution of Minu's personal character or how the young couple dismiss their ego and initial misunderstandings to unite, Ray's 1961 film, based on a short story by Rabindranath Tagore, is a masterpiece that will draw all and sundry. If you haven't watched it yet, you really cannot fathom what you are missing...