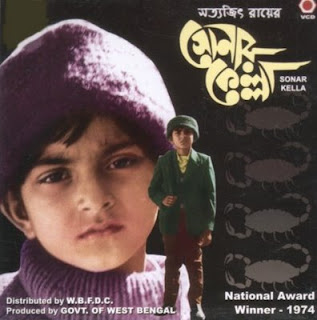 Examination answer scripts and later when we would pack our bags for a vacation after he had submitted the mark sheets. Baba was the senior Mathematics teacher in Don Bosco School in Calcutta as well as the co-chief examiner of the ICSE Boards. So, during the first half of the holidays the whole house would be stuffed with cardboard boxes of scripts that would eventually decide the fate of youngsters who scribbled their knowledge of numbers on them. Or so, as we were made to believe in those gullible years by every teacher in that non-digitised world of ours!
Satyajit Ray's Feluda flick, Sonar Kella takes me back to one humid morning during summer recess when my father announced, "Let's just quickly finish today's quota and in the afternoon we will watch Sonar Kella!" My eyes lit up. I quickly made him a cup of tea (I was 15 then) and got him his specs. He sat down, brandished his red pen over the scripts, and started deciding the 'fates' of the helpless children. Intermittently, he asked me to cross check the calculations so that there were no errors later in the tally sheet. Sharp at 12 noon, he wrapped up, we both finished our ablutions, gobbled our lunch and sat down to watch the film. For the 16th time. Ignoring my mother's high-pitched, "God! How many times more..."