And she learns to love (Dillagi) 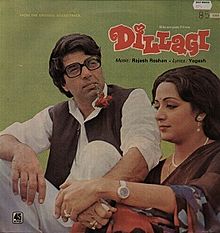 Love can seriously do wonders. It has the capacity of changing worlds in a moment. One brush with the sentiment and you can start feeling woozy all of a sudden. A person with no romance in his soul can actually turn out to be quite a lover when he has his first exchange with the wondrous feeling. And a woman who is famous for being the strict and dry spinster can actually start enjoying her encounter with love. So many facets this feeling has. And it's such a joy to know that there is love in this world. In every nook, every cranny...

Who is the loneliest of them all? (Pestonjee) 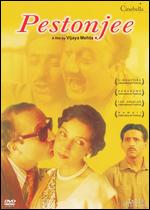 Seriously, there are so many degrees and kinds of loneliness in this world. While one might appear perfectly happy from outside, may be suffering from some crippling and gloomy depression from inside. While others may think his life is perfect, he himself knows what the abject truth is. Pestonjee, a brilliant chronicle depicting life of the miniscule community of the Bombay Parsis delves on these several kinds of loneliness suffered by man. Vijaya Mehta's 1988 tale is perfect, poignant and makes one travel with Phirojshah as he tries to seek happiness by living someone else's life. 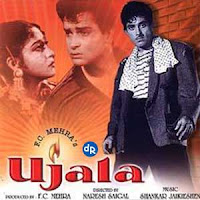 I guess Shammi Kapoor was just not cut out for these roles. Dark, depressing and gloomy. In Naresh Saigal's 1959 drama, Ujala, my favourite Kapoor plays a poor young man suffering from the drudgery of life, yet trying to eke out an honest living and due to some unfortunate co-incidences has his self-confidence battered and bruised. He tries to prove himself time and again, with the help of an aged reformist and his sweetheart but the road to perdition is strewn with thorns. He does redeem himself of all the aspersions cast against his character but the journey towards redemption is too tedious and full of depression. Naah! Shammi Kapoor is definitely not cut out for such a gloomy role! 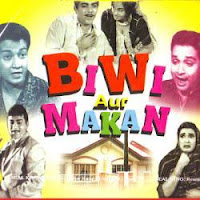 I wish they made more like these. And gave Mehmood top billing in them. That would ensure total fun. Like in Biwi aur Makan, a comic caper on the problem of finding accommodation in big Bombay. They protagonists have to twist every rule in the book to find a shelter and that too with funny after effects. This 1966 film by Hrishikesh Mukherjee may not have a stellar cast (I did not even recognise so many faces) but it has a name that catapults this mediocre script into one of utter fun and laughs. And that name is Mehmood. 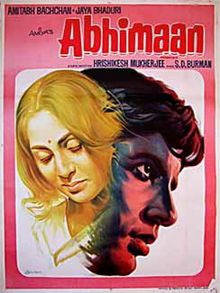 Let's not even deliberate on the resemblances that Hrishikesh Mukherjee's 1973 classic Abhimaan shares with the life of real-life couple Amitabh and Jaya Bachchan. For, some might say the movie is almost similar to how Amitabh tries to uproot Jaya in terms of popularity, some might declare that all that is bunkum. So, let's just avoid the oft-discussed.
Instead, let's immediately delve into the beauty of this marvellous emotional drama where love, ego and understanding forms the crux. Abhimaan is not just a film, it an experience that needs to be felt. When the good times roll, we need to regale in the mirth. When the storm of ego and pride clouds the halcyon state of affairs in Subir and Uma's life, we need to take a leaf out of it and realise what goes wrong and how it needs to be avoided. While the two lovers suffer, we pray that everything turns out just fine and that music ultimately irons out all the differences that has crept in voluntarily as well as involuntarily. 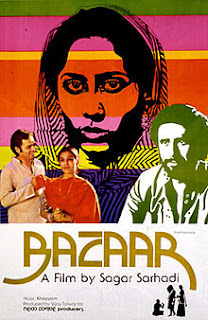 Bazaar is a much celebrated film, they say. And why not? It's got a stellar cast, a fabulously hard-hitting script, a setting that reminds one of the Hyderabad that is on the cusp of old times and modernity and seven hauntingly beautiful songs. Sagar Sarhadi's social commentary on the sad plight of girls from poor families in Hyderabad who get entwined in the commercial storm of lust and circumstances truly is the making of a brilliant film. But then, Sarhadi I believe is no Shyam Benegal. What is so marvellous about Mandi is its sharp tongue-lashing treatment of the sordid subject. 1982's Bazaar is honest, but in its many labyrinths there is a slight maze that is difficult to gauge. The film starts of with several questions. Though gradually the knots are loosened, it is too late to hold on to the interest. Perhaps, I'm the only one not absolutely impressed with the film. But then, I have reasons galore.