There was this niggling urge to title this post "When east meets west". For, that is essentially what Ora Thake Odhare is, from a very superficial level. The 1954 film directed by Sukumar Dasgupta depicts the constant battle between the members of a West Bengali family and a family from East Bengal. Thereby representing the friction between the two communities that has been since eternity. But then, as the minutes elapse, this hilarious movie turns out into a kaleidoscope of emotions that one got to see in the Bengal of yore. How despite all the friction, familes, both from West and East Bengal, were there for each other in times of joy, sorrow and distress. How, no matter how much they fought, they helped each other in every big or small way. And how heartwarming Bengal and its culture used to be. When the film ends, it does leave you with a feel-good emotion, that is not devoid of the tinge of wistfulness for what we have lost from the days of yore...

When ego tampers with love (Indrani)

I would say that Indrani is a good romance that is seriously ahead of its times. It shows a young girl fighting for her love against her conservative parents, her staunch and mean in-laws and against some inane taboos that rid society those times. She is also the one who voices her feelings first, leading her lover to recognise the feelings deep down in his heart. She is the one who proposes marriage first, a thought that was considered outrageous for women earlier. And yes, she is the breadwinner of the family for a good period of time. At least till the man of the house pulls up his socks and has resolve enough to do something worthwhile in life. In that, Indrani is a total departure from the films that projected the obvious.

All for a sari (Phagun) 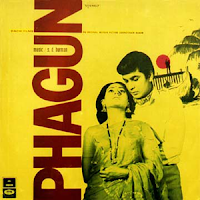 Even if you are watching Rajinder Singh Bedi's Phagun with a sensitive eye, it is impossible to evade the very inane premise that takes the story forward. An expensive sari soiled during the season of colours! Yes, nothing but that. That single pink sari is the cause of much heartburn and costs Gopal and Shanta their happiness and years of togetherness. Surely, this much-promised saga of complex human emotions could have had a more solid pretext! 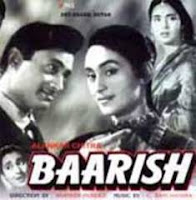 There is a good thing and a bad thing about watching a very, very old Dev Anand film. That would be films in the 50s, when he was yet to become the charismatic debonair who made all of us weak in the knees. He was yet to get the swagger, that style, that mischievous glint in his eyes that crushed the knee caps to jelly whenever he appeared on the screen. And yes, he was yet to get that sweeping hairstyle! 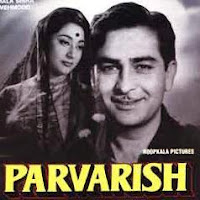 I don't believe this! An entire film hovering on the predicament of a father who is not able to distinguish his own son from another child who is just as cute!! Ridiculous! And I thought Parvarish would have more meat to it!

Of hope and survival (Saudagar) 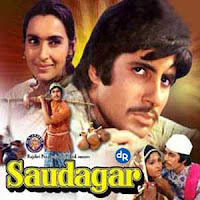 As you sow, so shall you reap. An adage that befits the plight of Moti, the most famous jaggery seller in the village, who bartends an innocent woman's emotions for his own selfish need. He does not even pause to think that he is doing a heinous crime playing foul with Mahjubin, a woman who never even suspects him once. This widower could very well have continued to deal with her hardships in a dignified manner had Moti not fooled her into believing that he wants to marry her for love. And she would have been saved of feeling distraught at how Moti, and in other words, fate strikes her with a cruel blow.

When I was in school, there used to be a film aired on television almost regularly. Those were the times when cable TV had just been initiated in India and we, the takers lapped up everything no matter what it was. So, understandably, I was hooked on to these films (whether good or non-sense) at every opportunity. This particular film, of course, was quite interesting. It was a spicy family saga that revolved around a woman and her unique bond with her very young brother-in-law. 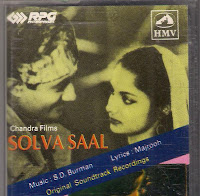 I'm extremely fond of Dev Anand in this avatar. In Raj Khosla's Solva Saal he is a naughty, smart, charming and gorgeous man who devastates with his smile, which thankfully comes across quite often. The best part is that he is witty, fast and makes light of almost every situation. So, you get to see his fascinating smile all the more. He flirts with elan, is in command of every situation and romances so cutely. In 1958 he was yet to become heavily dependant on his signature mannerisms. So, what we get is a free, casual and rollicking character in Prannath Kashyap. Yes, even the name has an element of fun in it.

For her eyes only (Sunayana) 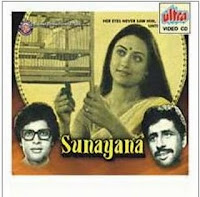 Hiren Nag's Sunayana could very well have been a different film if the end would not have gone the tried and tested path. Partial as I may sound, but somehow I feel that Inderjeet deserved Sunayana as much as Raju. For, didn't he look after her unconditionally when she had nowhere to go to? Didn't he keep mum about his feelings for her knowing full well that she would feel pressurised if he were to own up that he felt for her? Didn't he want to find her a suitable groom, never once presenting himself as a suitor? And most importantly, he never took undue advantage of her helpless condition. 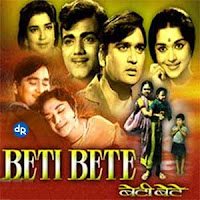 One thing's a given when you sit down to watch a L V Prasad film; there will be a plethora of twists and turns in the life of the main protagonists, family members will be separated by a freak stroke of fate, while one sibling regales in wealth, the others will have tormented livelihoods, there will be umpteen occasions when the members will come face to face with one another without each realising that they are related and most importantly every crease will be ironed out as the climax approaches.