I wouldn't recommend this film highly. But yes, if you are in a serious mood for some family drama, especially some induced by the caustic mother-in-law, then this is THE film for you. For, all sparkling fireworks, both good and bad, is reserved for Lalita Pawar. And like always, she never fails to deliver here. When she is the doting mother, she is every bit as loving to her sons. But when she bears her fangs towards the daughter-in-law she is not particularly fond of, then God save the young bride. Lailita Pawar is splendidly sarcastic, ejects poison at the drop of a hat and never minces words to declare that she truly hates this girl. And in her histrionics there is that level of perfection that makes her such a revelation to watch. Lalita Pawar is the attraction in this otherwise tepid film. And this, despite the film starring the handsome Dharmendra and the talented Waheeda Rehman. 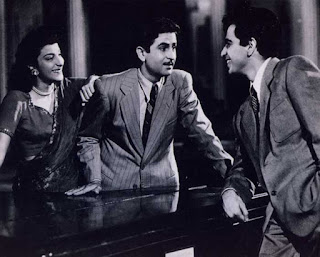 For the last few weeks both my husband and I have been talking about Mehboob Khan's Andaz. Watching the 1949 film was top priority for us and we just wanted some peace so that we both could relax and enjoy it. We've heard a lot about it, only praises, and were sure that we love the Raj Kapoor and Dilip Kumar chemistry. Nargis would be the perfect spice in there. My better-half and I are immensely fond of the young Kapoor, his roguish charm and of late, my man has realised that Dilip Kumar is The Dilip Kumar not for nothing. On his birthday he almost implored his friends to gift him the DVD of the film and he came home with a beaming smile saying, "This Sunday, then!" I was ecstatic, too. Why not? Raj Kapoor, I love. Dilip Kumar, I adore. And Nargis, though I don't think much of her looks, she is definitely one of the best actresses we've had in ages. 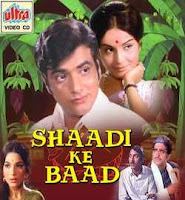 Generally I'm quite predisposed towards any film from the L V Prasad stable, but something about Shaadi ke Baad kept nibbling at me after a point of time. The cast was good, the story was fun, the performances were just and the songs were in place. But something, which I'm yet to pin-point correctly, left me quite dissatisfied. Was it the rambling turn of events after intermission, the lack of concretised drama or simply the lack-lustre script? Also, what left me pondering was why the director would waste a fine artist like Shatrughan Sinha by casting him as an aging landlord who's lost all his fortunes but is too proud to give up his royal behaviour? This actor, who's capable of turning a drab script into a enticing one, is given just about a few scenes which does him no justice.