There will never be such a brilliant set of actors. The moment they land up together on the screen they ignite the frame with the most scintillating of antics. They complement each other immaculately and spice up every story...
I'm talking of luminaries such as Shabana Azmi, Naseeruddin Shah, Saeed Jaffrey, Smita Patil, Kulbhushan Kharbanda, Annu Kapoor, Amrish Puri and Om Puri. In Shyam Benegal's Mandi, they continue the rule; they are too good to be not true... 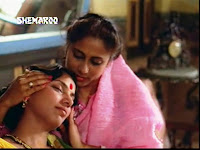 But, this cannot take away the credit from the director, who craftily laces a poignant social drama with so much humour that many times this satire might be deemed as irreverant and comical. But once one goes beneath the upper layers, what emerges is the stunning commentary on the ghastly web of politics running strong in civilised society. Mandi's charm lies in the freewheeling manner the story is told, which sheds light on the daily struggle of some prostitutes. But, even before you think that this 1983 drama will lodge you into a sphere where you will be bombarded with lofty lectures and monotonous lessons about the wrongs done to women for which they have to sell their flesh, Benegal offers a witty and clever to rev up the tempo. Plenty of emotions are weaved into the plot. Plenty of characters make the emotions come to life. Plenty of madcap action heightens the pace and plenty of delicious histrionics make it extremely enticing... This is an absolute example of good film making. Benegal uses Ghulam Abbas's short story Aanandi, to disrobe the maladies rampant in society. Be it greed, deceit, hypocrisy, lust, superstition or treachery, Benegal's Mandi points a finger at each one of these without being crass, loud or in your face. Perhaps, that is why this film is of greater appeal to me than Bhumika, another of Bengal's masterpiece and a definite Smita Patil extravaganza. But I'll ponder on the reasons as to why I'm less impressed with it some other day...

Here's the story in short. Rukmini Bai (Shabana Azmi) is the madam of a bordello in Puratanpalli, a town that had seen better days when the feudal lords used it as a watering place. Needless to say, Rukmini Bai's trade flourished during those halcyon days. But now, with feudalism giving way to the hypocritical middleclass, Rukmini Bai, the stern madam is having a bit of a problem maintaining her stance in the town hell bent on maligning her and her girls. There are enemies in her own house as well. While she is most eager to fan the singing and dancing talents of her girls, there are those like Nadira (Soni Razdan) and Parvina (Anita Kanwar) who find it easier to mint money selling their bodies. Rukmini's ways are easy and old-fashioned, bearing a touch of class of the old courtesans, Nadira is more cut throat and impatient. She is not ready to let a newbie soften up to the idea of the business. She lets a hungry tiger into Phoolmani's (Sreela Mazumdar depicting the plight of most girls in rural India who land up in brothels because they innocently believe in some hyenas!) room when Rukmini is away for the night. The problems start there...Nadira instigates the other girls against Rukmini and is a sheer arch rival to the madam. So, in keeping with her character, Soni Razdan is crass, vulgar and cruel. The madam on the other hand is more matronly, soft and loving. Though, even she, knows how to play her cards astutely... 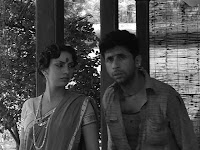 Little nuggets add value to the story. The relation between Tungrus (Naseeruddin in a startling role of a servant) and the madam is strange. Tungrus can be well called the beast of burden in this film. He is the sole servant taking care of the haveli and the girls living here. He is screamed for when monkeys are let loose, when cheeky photographers stealthily capturing nude girls are to be taught a lesson, when landlords come calling suddenly, when a suicide attempt needs to be hindered, when someone needs her back scrubbed during a bath, when there's a tea craving, when luggage needs to be carried and .... The list is endless. No wonder, Tungrus regularly vents his frustration and ire every night in an inebriated condition against his mistress and curses her for her trade. But when the influence of alcohol is gone, Tungrus is back to his slave self, a mute spectator to the circus that is happening around him. Tungrus loves to hate Rukmini Bai but can he stay away from this martinet of a madam???Similarly, Rukmini reprimands him at the drop of a hat and insults him with expletives. But, will she be as commanding without this servant??? A unique relation this is, portrayed flamboyantly by these two master actors. And, come to think of it, Azmi and Shah were seen earlier the same year playing husband and wife in Shekhar Kapur's Masoom. This is sheer talent, nothing else... 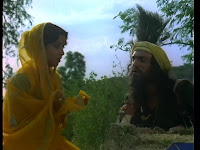 Rukmini's bordello faces threat from Gupta (Kulbhushan Kharbanda), a scheming real estate developer who promises her with an alternative settlement. She is circumspect, but Rukmini is no ordinary woman. She is a fighter, thought Benegal garbs her struggle with her faith in the Almighty. Here we see Amrish Puri in a miniscule role of a Dervish, a role that perhaps only points to the versatility of this man.Rukmini's new bordello flourishes again and she is happy. After all she does know what men want. But will her girls let her be happy and will fate be appeased with her success???

Deftly intertwined with this social commentary are love stories that are as unique as cute. The cheeky photographer Ramgopal (Om Puri is fantastically delicious) ultimately wins over Basanti (Neena Gupta is lovely for a change) and promises to help her become a film star.
But what we think of Sushil (newcomer Aditya Bhattacharya does look goofy and unassuming) and Zeenat's (Smita Patil) love story, doesn't happen. Yes, there is a dirty secret that Rukmini has been guarding all through the years. When the secret is revealed, only then you comprehend why she has been so protective about Zeenat, who herself has shown eagerness to romp with the photographer and the havaldar... 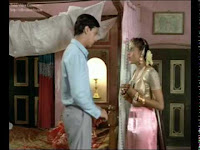 Zeenat reverts to the calls for liberation in a very unexpected fashion. There's every bit of masala towards the end when Rukmini and Agarwal (Saeed Jaffrey) chase the two young lovers. There's anticipation and suspense as to whether the star crossed lovers will unite... Smita Patil has been considered for this role not for nothing... She is an innocent soul, untouched by the lusty men and unravaged by the harsh realities of the trade. What I find it difficult to swallow is why does she enjoy the fruits of Rukmini's attention without ever questioning the madam. But then, we see the desires of youth in her too. Especially when she is singing the tantalising Chubhti hain (Asha Bhonsle's rendition add life to Vanraj Bhatia's score) and Zabaaney badalti hain. And, when she defiantly disagrees to listen to the madam and keeps harbouring those special feeling for Sushil, just after he reveals that he is enamoured of her. Perhaps she is pleased more because he chooses her above Malti (Ratna Pathak Shah), his shy, rich and reticent fiance. 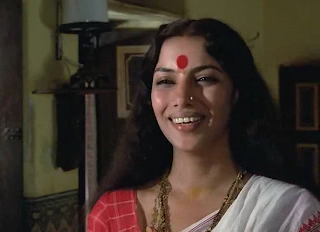 The queen of this market is of course Shabana Azmi. Her body language, her dialect, her big red bindi, her hairstyle, her expressions, everything is so effortless and superlative. Even when she sheds tears for being the unfortunate one, she does it with a tinge of wit. She combines humour and pathos with panache. These girls are definitely treated like commodities. They are shunted from one market to another. But if you have a entrepreneur as dexterous as Azmi, you needn't worry about customers. This madam knows how to sell her wares. And she will make sure that it is a profit-making venture...
Posted by Sharmi Adhikary at 05:50