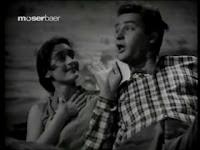 What can possibly go wrong with a romance that stars the inimitable Shammi Kapoor and the charming Nutan? I'd say, a lot of things. If you are not sure of what you want your film to be--- a fresh love triangle, a sad drama or a thriller, if you do not have any idea of how to weave different elements together, if you lack the art of copying from other films craftily and if you allocate too much screen time to side characters without exploiting Pran to the fullest. And yes, not make maximum use of the gorgeous soundtrack scored by the melody master, OP Nayyar and the beauty of Shammi and Nutan put together... 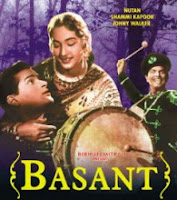 These are some of the flaws that spoil Bibhuti Mitra's Basant, a film that had the potential to become one of the best romantic musicals but misses out because of some silly errors in execution. True, the 1960 film starts with loads of steam, but somewhere down the line and amidst the inane subplots, the punch goes missing.
Firstly, you cannot presume that the audience will not recognise the two films that inspires Basant. Blatantly lifted from Chori Chori (which is actually inspired from It Happened One Night) and maybe a bit from An Affair to Remember, the director forgets to smudge the similarities between his work the the sources. Ashim and Meenakshi meet in the same fashion as did Sagar and Kammo. Similar altercations follow. Nutan even carries herself with the same highhandedness as Nargis. Admitted that she is also a rich and spoilt daughter of a businessman, but maybe the director could have should her to be a bit unique in her ways. At least with Nutan, I always want refreshing things. There are times when Nutan says that since her father admonished her for everything and forbid her to do anything, she has grown up to be so difficult. She says difficult but we see insolent. For, her arguments with her father are plain rude and that repetition of  'My foot' is absolutely irksome. 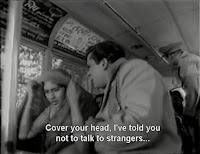 Ashim and Meenakshi experience different adventures while trying to evade the eyes of law (they pretend to be a married couple and you can see Nutan slowly falling in love with her rescuer). But their escapade lack the fun seen in Chori Chori. Johny Walker's character is also extremely irritating and a tad forced. In fact, all he does is slacken the pace of the film. Who is bothered about his love story? I'm not.
Then comes Minoo Mumtaz, an actor thoroughly wasted in this film. Apart from her dances and her calling Shammi Kapoor 'Lambu' affectionately, she hardly has any scope to display her histrionic skills. 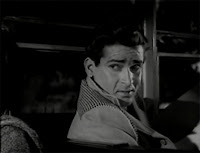 While I appeased myself thinking that this is just a watered down version of Chori Chori, bang came the whiff of the second inspiration, after a contorted twist of the diamond necklace. That bit is extremely tardy and farfetched. A man going to do business in Kamroop aught to realise that he will not be able to return soon to meet his beloved. But then, this is the hero talking and almost anything is possible for him.
After Ashim goes to Kamroop, we see the film looking dangerously similar to An Affair to Remember, only a paler copy. It lacks the sublimity of the original. The inspired version is only more confused and forced. Nutan in a wheelchair does not look as sad as she should have and the film is getting unnecessarily long. I almost pine for it to be over. But then, we forget that there is someone called Pran, umpteen misunderstandings, a boring and lengthy action sequence and some silly sacrifices... 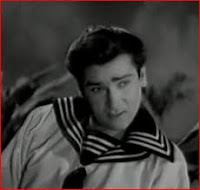 A film cannot have everything bad and Basant is no different. For, Shammi never fails to deliver. He looks smashing and is super smooth with those funny lines. I love his scenes with Nutan. His good looks complement her beauty and haughtiness. Only if his name was not Ashim. Someone with Shammi Kapoor's magnetism aught to have had a more smart name. But anyways, I absolutely loved him in the film and I think he seriously looks fetching in his sailor's costume.
Nutan looks gorgeous as usual. She is naturally spontaneous and her eyes are naughty. She looks lovely with Shammi Kapoor. And here you get to see her dance a bit.

And yes, the songs, they are ethereal melodies. Be it Chori chori ek ishara, Nainon mein suraj ki kirney, and Raastey mein (love the picturisation). Mere lehengey mein ghungroo is very catchy, as is the song lipsynced by Cuckoo (I just can't recall the words). In both these Nutan dances, and is very pretty.
The tribal songs Ukkad dukkad bamba and Raat chandni sama hain suhana are great, too. Minoo Mumtaz sure was a good dancer. How I wish the film, like these superb songs, had the power to make me fall in love with it...
Posted by Sharmi Adhikary at 07:51