While all eyes are trained on Amit Masurkar's Newton and Rajkummar Rao today, I would like to draw your attention to Shiladitya Moulik's film called Mrs Scooter that stars Anjali Patil in the pivotal role. She is the girl who supports the stellar cast of Rao and Pankaj Tripathi in Newton as Malku. Ever since I've discovered her through Mrs Scooter, I cannot not be wonder-struck at her nuanced approach to acting. She is critically acclaimed and immensely talented. This lissome dusky beauty is not just about looks. Her craft has the punches. 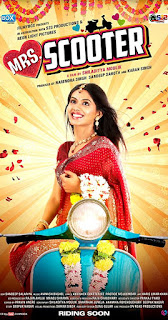 I don't get why critics found Mrs. Scooter depressing and devoid of hope. I thought it was an uplifting and a subtle love story that though in some parts might seem far-fetched but it's effective. Two stories, that of the new bride, and the scooter, are placed in a linear fashion so that we start identifying both as two kegs in the same wheel of things. It's as if the inaminate object is determining the path that the bride's life will take.

Shot entirely in Aligarh, the films revolves around the life of a new bride who accompanies her husband to the house where he puts up as a tenant. The day he gets married he also buys a blue scooter, signifying that he is embarking on a new journey in his life. The scooter becomes an intrinsic part of the couple's life that is drawn with minute precision by the director. Even as they reach the house, the landlady greets them and wants to know every single detail about the bride. A nosey parker of sorts, she also cracks crude jokes about intimacy that the bride finds rather strange, considering the lady hardly knows her. The couple slip into their own room and the bride immediately gets busy cleaning up the mess that the husband had left the place in. The bride is instrumental in altering the vibe of the room from a bachelor pad to a cosy home and the two settle into blissful domesticity. The scooter is also a big part of their lives, almost like a third member intertwining its life with the owners.

I stumbled upon Sandip Ray's Chaar yesterday night while rummaging through Amazon Prime Movies and it didn't disappoint at all. Rather it uplifted my stressed nerves to a happy state and I went to sleep satiated. You see... I am having a rough time at work not because of the work load. The 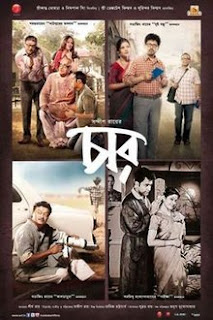 volume I can manage. But when the powers-to-be are adamant about being irrational and difficult it's then that the going gets tough. Hence my seeking solace in cinema. After Malhar...

Chaar is a Bengali anthology film that brings together four crisp stories by three brilliant writers in the history of Bengali literature. When Sandip Ray started his cinematic journey, all eyes were trained on him to check whether he would be an able successor to his father, Satyajit Ray, the name that is synonymous with brilliance, elegance, technical prowess and magic in the film world. I don't want to delve too much into the maestro's craft here because this time the spotlight is taken by the son and with a brandish. With every film Sandip is getting there; he is subtle, sure and deft with his direction. His marvellous genes are showing their true colours. He is taking these little stories and making some gems out of them. I wonder how the film did when it released but last night it made me a happy person. Four short stories, presented in a no-nonsense format, supported by a wholesome cast, Chaar was quite a pleasant surprise that I unraveled by sheer chance...

Am I the only one who found Yash Chopra's 1981 romance, Silsila, absolutely forgettable? Must be. 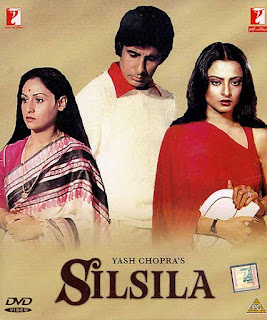 For, everywhere I look and listen, there are such good things uttered about the film. It's attained this cult status amongst fans of romance. Then why did it not trigger the same emotion in me? Am I being too hard? Too difficult?

Fact is, while watching this lengthy soppy saga of a man's dithering and indiscretion, I only felt three things. The music by Shiv Kumar Sharma and Hari Prasad Chaurasia is beautiful. It has that pleasant simplicity that makes it timeless. The costume designer did a darn good job with the women's wear. Jaya Bachchan and Rekha wear the most stunning saris. Being a sari lover, I could feel the dribble in my mouth as the heroines sashayed in those six yards. Thirdly, I felt really bad for Jaya Bachchan. Not because she is treated badly by Father Fate. But because she seemed disinterested in the film, mouthing dialogues in a very non-committal way. She's projected as a helpless woman who has to depend on the men in her life no matter how wrong they have been to her. I see her spark up in one scene where she implores her husband to rethink his decision. But that's about it. Frankly, I want much, much more from an actor of Jaya's calibre. I feel let down by the role etched for her.

My best friend's husband just quit his job. Disgruntled with the work ethos and favoritism at his workplace (one of Delhi's oldest five-star hotels), he couldn't take it any more. The good part is that in about two months he'll be joining an airlines company in a senior position and he's looking forward to it (so are we; he's promised us a big treat!)
Two days back, we were talking about work conditions in corporate offices and he challenged the elitist mentality that private companies project; the red tape culture that is in no way different from government offices. He was unable to eat the tasteless mash that is doled out day-in and day-out in their office canteen and despite complaints the system is unchanged. Just to avoid further confusion he has religiously paid up his canteen fees lest the higher authorities raise a hue and cry over why this 'saab' has all the problem when the others are satisfied! That's how it is everywhere I guess. The degrees vary. 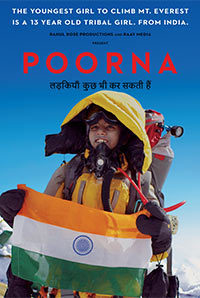 (2017), an earnest masterpiece chronicling a teenager's hopes, struggles and determination. In one of the scenes Dr Praveen Kumar, the secretary of the State Social Welfare Residential Educational Institutions Society visits the school where Poorna is a student for a check.He is a simple man with no airs and amiably expresses his wish to eat lunch with the students. The principal is skeptical but he is in no position to prevent the secretary. When the food is served the principal wriggles out saying he is on a fast. One morsel is enough for Kumar to know the true picture. He looks at the students around who are silently eating whatever has been served, pauses to clear his mouth and gives a cold stare to the principal. The message is quite clear. What makes them serve this unpalatable trash to these poor students? Just because they are poor they are being treated with utter disdain. And this, despite the funds distributed regularly to the organisation. Yet again, through this brilliant scene, we get a glimpse of the corruption rampant in our country. It has permeated to every level possible.

I'm mentally prepared to be trolled, derided and umm... maybe ostracized even. But I need to say what I need to say. Kabhi Kabhie is Yash Chopra's most overrated film ever. Period.
Brickbats... bring it on...

The other morning I got into an interesting conversation with a 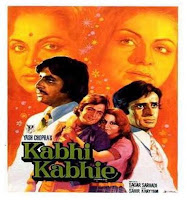 neighbour. After the sundry exchanges about child tantrums, daily chores and the usual agonies of life in Modi's India, I quickly asked her whether she loves romances of the Yash Chopra kind. She started with a gushing take on Dilwale Dulhania Le Jayenge and how it was her go-to film even a few years back. On correcting that the film was actually not Yash but his son's Aditya's directorial debut and perhaps his only watchable film, she revealed that it might not be as appealing today as it was earlier. Why? Because, as she put it, "Times were different then. We were different. I cannot relate to it anymore." This was my chance, my ticket to launch a tirade against a film over which I wasted three hours the previous night. Now why I did not abandon it midway? You see. I don't give up that easily. I'm a movie freak.
Read more »
Read more »
Posted by Sharmi Adhikary at 05:32 6 comments