When the system is riddled with flaws (Nikaah) 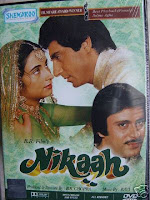 BR Chopra's Nikaah is a heartfelt treatise on the true state of women in an Islamic society. From the surface everything might appear rosy, but actually there are too many situations when she might not consider herself safe, secure and in a stable circumstance. In fact, even when the Islamic law is so called trying to safeguard her interest, it is actually making her go through even more pain. Treated like a toy by male chauvinism that is so rampant in society, she is at the beck and call of every other mind except hers. Yes, once you watch this 1982 drama, you would actually thank your stars that you are not in Nilofer's shoes... 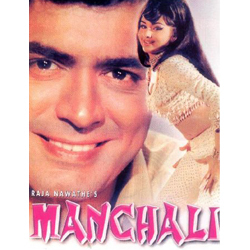 There's nothing like a frothy romance to dispel the gloom. Taxing work, the cold and certain other reasons have not been keeping me in the right spirits. So, I chose to watch a film, which I somehow had an inkling, wouldn't fail. Raja Nawathe's Manchali was fun from the word go. Yes, be it the pretty heroine, the smart hero, the freewheeling plot and the easy comedy, everything in 1973 romantic comedy is so likeable. Especially, Sanjeev Kumar, who with his charming presence and uninhibited persona, lifts the predictable plot to a fun-filled roller coaster ride.

Despite all the goodness (Sharmilee) 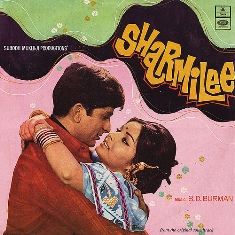 I've been struggling to find time to put up a new post. Well, that's just half the truth, if I may be allowed to say so. Actually, I've been neck deep in work, but that does not mean I've not been watching films. But over 15 days I've mostly watched those films which I've already written about. My husband is revealing his new-found love for the classics and both of us have been enjoying them for the past few days. So, that does not leave me with much to write about. I just sit there with him regaling in the old films I'm so fond of, while he discovers why these classics are actually worth celebrating.
Secondly, the never-watched films that I've managed to see, didn't quite make an impression on me. Some were tepid, some were bad. So, I've been in knots as to what to write about for my next post. Now I've decided to delve on Sharmilee, Samir Ganguly's 1971 romance that I loved only in parts. The film is so good till the intermission. But after that, it degenerates into a nonsensical potboiler replete with inane twists, fights and crude drama. And I bet a more subtle approach would have done so well here. At least made me sing praises for it right here, right now...