The hills are alive (Kanchanjangha) 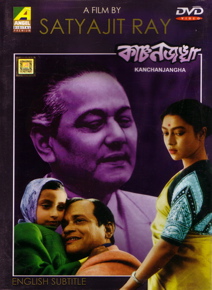 What a brilliantly multi-layered film Kanchanjangha is. Every frame is steeped in imagery, every dialogue resonating with the inner doubts clouding the characters' minds. Just like the mist that is blocking out the sparkling view of the majestic Himalayan range. But, by the time the movie ends, every doubt is put to rest, every question answered, every nagging dillemma is solved. And with that the mist clears out of Darjeeling to gift us with the breathtaking view of the Kanchanjangha. Albeit through Satyajit Ray's eyes.

The mist is perfectly indicative of the doubts that cloud Monisha's mind as she treads on a tight rope between her father's wishes and her own desires. At another level it reflects the helpless state of Labanya (Karuna Banerjee) as she is a silent party to her husband's forcing their daughter's marriage with Mr Banerjee. The significance of the weather hardly ends there. It represents the misunderstandings and suspicion brewing between Anima (Anubha Gupta) and her husband regarding her illicit affair. In its misty avatar it sheds light on Ashok's (Arun Banerjee) mindset as he struggles for a decent job.
But, in my reckoning, the weather is directly symptomatic of the pretentious demeanour of Raibahadur Indranath Chowdhury (Chhabi Biswas). Gloating in self pride and importance, he is purposely unaware of the fact that there are matters more severe than his own thoughts, wishes and declarations. He chooses to negate everyone else's desires just because he believes that he knows best of everything. A dominating patriarch, this man is conceited enough to fix the match of his daughter to a man of his choice without even considering that the young girl might desire otherwise. When questioned by his wife, he brusquely claims that he knows what is best for everyone and no one dare refute that claim.
Ensconced in his own bubble of importance, Indranath Chowdhury is referred to as 'Lordship' throughout the entire film, not out of respect or honour. This title is showered on him only to prove the extent of his rigid rule. He is prone to finalising every decision in the house and God help those who dare to go against him. 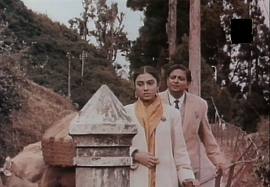 No wonder Monisha (Alakananda Ray) is at a loss when she has to force herself to like Mr Banerjee (N Viswanathan), an alliance her father is keen on finalising. She wavers with her answers, is not sure of her heart, but she dare not anger her father. After all, her sister, Anima, married the man of her father' choice? So, it is but obvious that she should do the same. But, here is this poor girl, innocently introvert, who is hardly attracted to Mr Banerjee. We feel her discomfiture in her behaviour, in her procrastination towards agreeing to Mr Banerjee's proposal. Ray captures the young girl's predicament in the scene where she runs away to hide behind a tree bark, the loud cacophonous music reflecting the storm in her mind. Her tears bear testimony to her troubled heart. But, her father's order looms large over her mind. What would she do now?

While Monisha gets her decisions sorted and finds a new friend in Ashok, the young man who catches the young girl's fancy, Anima and her husband need to deliberate on something really serious. Anima has been carrying on an affair with a past lover and her husband has got an inkling of it. A blame game starts and altercations ensue. Anima's husband is ready to separate. But Anima is petrified of the scandal that would arise out of the divorce. Or is she? I'd love to believe that she is more scared of her father's reaction. A father who was so sure that Anima would live happily ever after with this man. But, thankfully Anima and her husband resort to a middle path that saves the situation. A responsibility towards their daughter eggs them to reconsider their decision. Now, their problem is sorted. 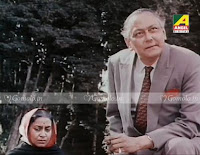 Worries have been gnawing at Labanya's mind. She is not ready to sacrifice Monisha's happiness. But how would this meek wife stand her ground against her martinet husband? Labanya musters up the courage and tells her brother Jagadish (Pahari Sanyal) to stop Monisha from taking any hasty decision. She now wants her daughter to listen to her heart. For that she is ready to pick a fight with her husband.

The most entertaining part of the crushing of Indranath's pride happens when Ashok declines his job offer. Realising that this man does not pride himself on being an Indian and is happy to credit the British for bringing glory to India, Ashok, the struggling commoner, brandishes his self esteem and shuns a Rs 300 job offer from the rich man. Though he grudges his decision slightly later on, it his honest approach towards making a mark with his own effort that floors not just Monisha but also us. His laughter is but a declaration of his victory over Indranath Chowdhury's falsity and pretense. 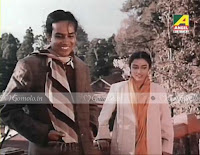 This 1962 film is the first coloured film attempted by Ray. With an original screenplay, he sure made Darjeeling look lovely. Well, Darjeeling is lovely. But from Ray's vision, Darjeeling talks. The hills reverberate with the sound of the birds, the song of the Lepcha boy and the click of the boots worn by the men in the film. And of course the chattering of Anil (Anil Chatterjee), the frivolous son of the domineering Raibahadur. When Kanchanjangha begins, it does so with the frothiness of a light film depicting the whereabouts of a big picnicking family. As the film rolls towards denouement, Ray shows that it is hardly so. There are graver issues to be dealt with.
And as Indranath Chowdhury beckons everyone, you can feel his lonely state. His worried brow reveals his shattered pride. He has no one beside him. All have sorted out their problems and moved on. The mist has cleared from their lives. Just like the mist that has moved away from the face of the mountain range. Now, the sun's rays shine bright on Kanchanjangha's glistening folds of snow...
Posted by Sharmi Adhikary at 09:18