A Baiju Bawra search on Wikipedia reveals that the classical maestro perished of typhoid at the ripe age of 71. Given this (though there's no historical proof to ascertain this claim) information, the climax of Vijay Bhatt's 1952 film is far from satisfactory. The rationale behind bumping off both Baiju and his sweetheart Gauri, is something that I'm yet to decipher. Even after he is victorious in his vocal duel with Tansen and reaching his village at the nick of time to marry Gauri, the film shows both the lovers drowning in the Yamuna. Sad, but very surprising!

The site also does not shed any light on his so called enmity with the famous Tansen, who used to sing in Emperor Akbar's court. In fact it says that Baiju Bawra, originally known as Baijnath Prasad or Baijnath Mishra, was an accomplished singer in the court of Raja Mansingh of Gwalior. And he was called 'bawra' because of his love for a dancer in Chanderi. Now that is something the film departs from.
Baiju Bawra opens with Tansen (Surendra) about to sit for his riyaaz. And given his stature (he is one of the 'navratans' or the nine gems in Akbar's court, lives in a stately mansion. Well aware of his consequence, Tansen will not have anyone creating noise in the vicinity of his house when he is practising his music. So no one should sing near Tansen's house also or else he would be executed. 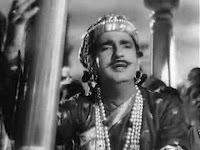 Just as Tansen's guards are roughing up one singer for daring to sing when Tansen himself is practising, a group of men are passing by the mansion singing devotional songs. When the guards try to stop them, the head of the group carry on with their bhajan arguing that the act of singing can be enjoyed by everyone. This angers one of the hurly-burlies and he attacks the man. In the chaos, that singer is injured. He happens to be Baiju's father who makes his young son (Ratan Kumar) promise that one day he will avenge his father's death. The young Baiju now only dreams about how to extract revenge from Tansen. He steals a sword from a dosed off guard to go and kill Tansen but is caught in the way. Just then, a local healer (Manmohan Krishna) comes to his rescue and takes him home.
I really like the way Ratan Kumar keeps saying Badla Badla whenever he hears Tansen's name. Though there is hardly any evilness about his angelic face, it is amusing to see this pint-sized boy work up enough anger and hatred in his entire persona. 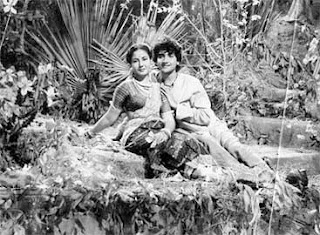 So, Baiju meets up with Gauri, her father Mohan. Gauri (Baby Tabassum) rows travellers across the Yamuna everyday. The two children develop a strong bond and grow up to be lovers (sample the bouncy romantic duet Jhoole mein pawan ki aayi bahar sung by Mohd Rafi and Lata Mangeshkar). In Gauri's tender words and association, Baiju forgets his cause for revenge and he is busy sharpening his vocal skills while singing love paeans to Gauri, who has now grown up to a pretty village belle. It is awesome how young Meena Kumari looks. She is thin, very, very attractive and has a exuberant air about her. Bharat Bhushan isn't to bad himself. Carefully careless in his rustic gear, he sure has a chocolaty charm about him when he tries to melt Gauri with Tu Ganga ki mauj (Mohd Rafi). The two actors make for a handsome couple and their repartee is quite enjoyable indeed.
Baiju is lost in Gauri's love and the damsel reciprocates adequately. But, Narpat will have none of it. This pompous and stupid but influential villager wants Gauri for himself and takes Mohan to task regarding the proximity between Baiju and Gauri. On confrontation by Mohan, Gauri cowers but only for a short while. For, there is nothing that can separate her from her sweetheart and she makes it quite obvious in the song Door koi gaye (it's a Lata Mangeshkar and Shamshad Begum duet). 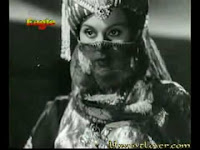 After much deliberation Mohan resigns to the fact the Baiju and Gauri are made for each other. Hearing her father say so, she erupts in glee and runs to tell her sweetheart what her father has decided. Just when everything looks so halcyon, the village is attacked by a group of dacoits led by Roopmati (Kuldeep Kaur). She demands a hefty package from the poor villagers who plead with her. But Roopmati is hell bent for her the money. Just when she orders her men to loot and plunder, Baiju breaks into Insaan bano (Mohd Rafi) that absolutely melts the tough Roopmati. She is so taken by this musical charmer that she decides to leave the village without any ransom provided Baiju goes with her, for here is a dacoit whose heart has been robbed by this young man! 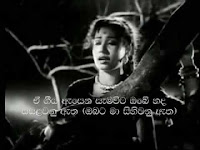 Gauri cries her heart out when hearing about Baiju's departure but her lover sees no other alternative to save the villagers. While he goes away Gauri weeps with Bachpan ki mohabbat ko (Mangeshkar). On reaching their den, Roopmati decks up in her finery to seduce Baiju but he is faithful to Gauri and slights the dacoit woman. Roopmati relates that she chose this trade to avenge the death of her father. This piece of information is enough to remind Baiju of his lost cause and he forgets everything...Gauri, the villagers and his music, but his decision to avenge the death of his father. He stealthily creeps into Tansen's mansion with a stolen sword and is about to behead the singer when he is doing his riyaaz. But the sound of music weakens his urge for cold revenge. Baiju cracks open Tansen's veena instead of his enemy's skull. It is then that Tansen tells him that if he really wants to see the end of Tansen, he should beat him in music. The film takes a turn from here and goes on to show how Baiju becomes a bawra and fulfils his promise, given to his dying father, in a very musical way. 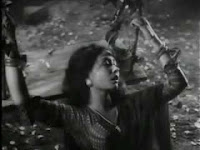 Though some of the scenes are incredible, the film lives up because of the music. Naushad's score is sheer bliss for the senses and so are the renditions by Mohd Rafi, Mangeshkar, Ustad Amir Khan and D V Paluskar. Man tarpat hari darshan ko aaj and Ae duniya ke rakhwaley are absolutely harmonious. The last duet Aaj gawat man mero is entertaining not only because you get to hear such great music but also you get to see the sheer power of both Tansen and Baiju. Deers run to Akbar's court while the maestros are at it!!
But my personal favourite is Mohe bhool gaye sawariya. Couple Meena Kumari's expressions (apart from her beautiful visage), Mangeshkar's awesome singing, the tearful situation, Naushad's exemplary music and Shakeel Badayuni's lyrics and you have a winner. 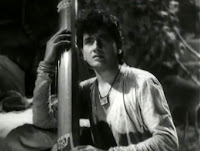 The gradual transformation of Gauri's persona is awesome. From a cheerful and teasing lover, she changes into a sorrowful sweetheart. Meena Kumari's histrionics are noteworthy (no wonder she became a superstar after this film and even bagged her first Filmfare Best Actress trophy for this one). Though Bharat Bhushan overdoes his sad act sometimes, he was not bad overall. And, he is really the best bet for these sad musician parts. A special word for the character Ghasit Khan, played by the entertaining Radhakishan. He sure knows how to tickle your ribs.
Given such good acting and such superlative music, I'd loved it if the ending was happy. I agree that the director deviated from reality and put his directorial license to full use, but wouldn't it be great if he showed Baiju uniting with Gauri and going onto live happily ever after? And singing so many more superb songs...

Posted by Sharmi Adhikary at 06:24