Glimpses of the Maximum City (The Perfect Murder) 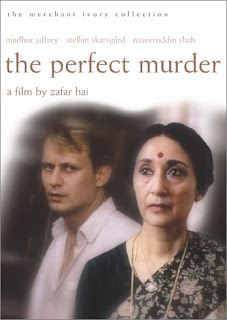 I just lapped this one up the very moment I got my hand on it. A small film that impinges on you for its vibrant cinematography, real landscapes and awesome cast. A story that stands out as much for the subtle depiction of crime and deceit as for its humorous depiction of the idiosyncratic characters. In that Zafar Hai's The Perfect Murder is a joyous collage of experiences that are so life-like and easy to relate to. Every character is well-etched and every frame takes you to 80s Mumbai, when it was still yet to earn the famed Maximum City tag.

The 1988 comic thriller being a Merchant Ivory production, a heavy British undertone is a given. This is a small Indian film in the English language adapted from HRF Keating's novel, The Perfect Murder, where the characters speak a tongue that is grammatically flawless. Barring Lala Heera Lal of course. But you can hardly grudge his tongue. For, it is his rhyming words that add to the entertainment (bigger-shigger, matter-watter and many more). His obese presence gets a hilarious touch because of the way he speaks...dialogues full of -ings and rhyming seconds.
On one silent night, a murderous attack is made on Mr Perfect (Dinshaw Daji), the private secretary of
Lala Heera Lal. Understandably, the rich builder is disturbed. For, somebody has dared to intrude his walled fortress. He is concerned for Mr Perfect, the 'dry old stick' as he's got important figures in his head. So, attempts are been made, by hosting costly Jewish prayers, to heal the deep wounds of the victim of the assault.
Soon, this case of top priority is entrusted to Inspector Ganesh V Ghote (Naseeruddin Shah), a dutiful representative of Mumbai Police's crime branch. Though Ghote's intentions are strict and steady, he is kind of brushed aside by the heavyweights of Mumbai's underbelly. He is too meek a character to cull information. Or should we say too good a person. While chasing a petty crook involved in diamond smuglery, he lets the thief get away trying to save a beggar from being run over. Only to learn that the beggar is playacting the whole scene to earn some 'bakshish'. For his soft nature, which is seen as irresponsibility, he is rapped often by ACP Samant (Mohan Agashe). But even after the admonishment, he is asked to investigate into the Perfect murder case. But little does Ghote know that in the process of solving the case, he will unravel so many more dangerous secrets and crimes that is plaguing the very existence of the city. 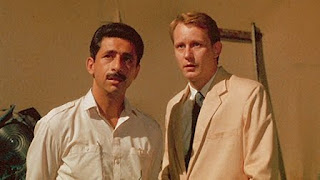 Situations go awry as Ghote sees his position and dexterity in jeopardy with the arrival of Axel Svensson (Stellan Skarsgard). And over that, the ACP wants Ghote to take Svensson around. Now Ghote, without even wanting it, has biten off more than he can chew. He has to nab the diamond smugglers, he has to solve the Perfect murder case and now he has to entertain Svensson. It does not end there. There soon comes another case, that is also to be given top priority. The minister (Vinod Nagpal) has just lost a ring fondly given to him by film star Twinkle (Archana Puran Singh). The minister will not rest until he has his present back. After all, the clammy old man sure cherishes the gift given to him by the pretty star!
Ghote is in a fix. So many things to do, and so little time. Then there is his family. His wife, Pratima (Ratna Pathak), has been incessantly requesting him for a colour television, for which he is saving money. But what irritates her more is that Ghote hardly gives his family any time. For him his duty is of paramount importance. Watch out for the scenes played in Ghote's home, they are sheer entertainment tinged with a certain poignancy about the struggle of the common man. Note how Ghote impresses upon the point of how the man should know how to run the house as well as his wife. Not only is Svensson amused, we too feel the subtle sarcasm in the scene.
I will not say that The Perfect Murder is a taut crime thriller. In fact, the pace, the tension necessary to make it so, is lacking. There are snatches of excitement and edge-of-the-seat moments though. But, this film stands out for its unique treatment. The fun is in watching the moves of the characters, especially the suspects. They all have something secretive about them. Lala Heera Lal (Amjad Khan is flamboyance personified) is always talking. His script is laden with riddles. It's just that Ghote has to untie them. He is fiercely protective of his family and image, yet he wants the 'Inspector detector' to solve the mystery. Everytime Ghote asks him some private questions, he rumbles on like a cannon, his fat red cheeks swelling and becoming even fatter. He is the most entertaining character in the Lal household.
His wife (Madhur Jaffrey) has a strict air about her. Busy with her pujas all the time, she sure has skeletons in her closet. Then there are her rantings about the desecration of the Hindu household because Jewish prayers are being read here. Her elder son, Dilip (Dalip Tahil) is a man with the gift of the gab (I love the way dalip talks in the film). Stylish, suave and handsome. What could he be hiding? His wife, Neena (or Neena Peena, according to her father-in-law), played by Sakina Jaffrey, is this lady with 'sex pouring out of her ears'. She sure has stories to tell. Lastly there is Prem Lal, the wannabe detective who fumbles out many secrets to Ghote, thus helping him unknowingly. This actor (the name of whom I'm not aware of) has a perfect British accent.
There are more colourful characters. Jain (Johny Walker), the Minister's secretary, the mumbo-jumbo sadhu, the petty diamond smuggler (Annu Kapoor), the nurse (Pearl Padamsee) and Sameer Kakkad (Felix D'Souza).
The mystery of the Perfect case is solved quite suddenly by Ghote, who earns the acclaim of being very talented from his friend Svensson later on. Though I found that part a bit rushed, I was happy with the different kind of treatment given to the thriller. And that it was my first Merchant Ivory watch, I was okay with experimentation.
The film is about 90 minutes. But, that's not the best part. The most beautiful aspect of the film is how Bombay is captured. There are so many scenes outside the legendary Taj Hotel. There are serpentine lanes, congested colonies, local trains and the street urchins. Juxtaposed with these grim realities are the rich and polished. You have a beggar walking beside a Mercedes, an elephant lazily crossing the road as a posh red car waits (note the man folding his hands to pay his respects to Ganpati) and a man masquerading as Lord Shiva flagellating himself outside a swanky mall. The Bombay rains are caught breathtakingly on the camera as we see Ghote and Svensson rejoicing in the first downpour. In the very next frame, denizens go about their trade with umbrellas for company. It is these vignettes of the Maximum City that make The Perfect Murder a riveting prospect...
Posted by Sharmi Adhikary at 09:12