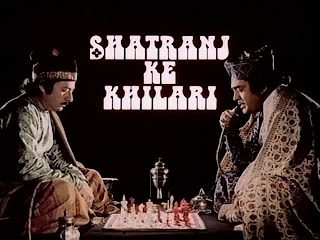 Satyajit Ray's films are like onions. With every viewing, they spring new layers. Every film of his guarantee a new thought, a new feeling, a new imagery, a new parallel, a new subtext, a new meaning, with every watch. Unraveling Ray, hence, becomes such a splendid experience.
In his first Hindi film, Ray toys with a story by Munshi Premchand. Shatranj ke Khilari narrates the tale (Amitabh Bachchan is the narrator) of Awadh's last emperor Wajid Ali Shah at the fag-end of his rule. It depicts how the East India Company confiscates his empire by pulling the strings cunningly. But the 1977 film is not merely a historical chronicle.
It shines because of the treatment. It is the almost maniacal love for chess of two noblemen in the emperor's land that relates the actual politics in the fiefdom of rich Lucknow. It is the intricacies of the games between friends Mirza Sajjad Ali and Mir Roshan Ali that actually shed light on how the British ensnare the king, who is more eager to spend time amidst poetry, music and with his '400' concubines. And it is these parallels that make the historical saga more gripping and entertaining. For, it is the happenings in these chess players' lives and the graphs of their character that decide the train of the annexation. I would say that their chess games, and the incidents occurring with it, are just representatives of the bigger political game ensuing in 1856's Lucknow. 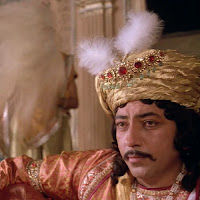 General James Outram (Richard Attenborough) decides that Wajid Ali Shah has no business to be the king. He calls for the king's prime minister (Victor Banerjee) to take the news of Awadh's confiscation by the Company to Wajid Ali Shah. The ground is shaken from under the prime minister's feet, but the next scene shows how exasperated he can get with the king as a flood of danger waits to submerge the royal throne. While Lord Dalhousie is angling to swallow his last 'cherry', the king is hardly perturbed. He is busy whiling away his time listening to mujras and writing poetry in his typical laidback way. Just when I thought that the long Kathak recital seemed to cut into the narrative, Victor Banerjee's expressions save the day. While the pretty danseuse is enthralling the King, here is the prime minister fears how to break the terrible news to his emperor. And, his eyes reflect his exasperation, too. Wake up oh king and take charge, he almost wants to say, it appears!

A similar frustration is killing Khursheed (Shabana Azmi) at home, where her husband has no time for her and is more fond of obsessing over chess with Mir Roshan Ali (Saeed Jaffrey), his opponent. Mirza Sajjad Ali (Sanjeev Kumar) does not even realise that his wife feels neglected and torn, she is pining for her husband day in and day out. A significant scene shows how Mirza fails to sexually gratify her as a game of chess is waiting for him in the living room. It is almost as if he is married to chess. Khursheed is the superfluity in his life. The hapless young wife, weeps and waits for her husband to realise his folly, while hearing the same stories over and over again from Hirya (Leela Mishra), her chamber maid.

While Khursheed is pining away, Nafisa (Farida Jalal), Mir's wife, is cunning enough to hoodwink him. A parallel drawn to the greedy and plotting Company. Nafisa encourages her husband to go and play because she is having an affair with his nephew, Aqeel (Farooq Shaikh). Even when the two are caught by Mir in the bedroom, Nafisa again hoodwinks him with her clever antics and lies. Mir is so gullible that though initially he questions Aqeel's presence in his wife's private chamber, he, like a signature idiot, believes his wife that Aqeel is escaping from the king's soldiers who want him in the army that is preparing to fight against the British.
So, does Nafisa represent the Company clearly? I think, this is Ray's way of showing how the Company has been cuckolding the Emperor. They made him king for their own convenience and now when their work is done, they want to brush him away like a fly. When the king question their whim, they shut him up with a hefty compensation. Surely, an emperor's reasoning will not be endured when the East India Company is on an acquisition spree to gain total control over all empires.

Nothing will keep Mirza and Mir from their frivolous past time. They search for a quiet corner in strife-ridden Lucknow to play their game. In the same manner as Wajid Ali Shah placidly accepts abdication. He does not make even an effort to withstand the British annexation of Awadh. In this he is an escapist, a thoroughly weak character, who is devoid of the bravura, so characteristic of famous emperors. Though he flutters for a while, declaring that Awadh will oppose the British with all their might, he chickens out when the problem hits him in the head. In the same way as Mirza and Mir chicken out of Lucknow to play their chess, fearing that they might have to join the royal army to fight the British. They are hardly bothered about stately matters as long as they can play. But it is this game that brings out the beasts in the two men. On the verge of losing a game, Mirza slights Mir saying that he is unaware of the affair that his wife is having behind his back. Mir feels insulted and hurt and resorts to extreme measures to get back his honour. But he is just as weak spirited and spineless as the king (who can best speak of a mighty revolt when faced with a critical situation, but is no brave warrior to fight with a sword and armour in hand). His misfiring at Mirza reeks of his own helpless situation. He is incapable of keeping a wife happy, just like the king, who is not strong enough to hold on to his Taj.
Albeit his quarrel with Mirza, Mir comes back to him to play, realising that his love for chess is too big. This is a loser, and his story is a subtext to Wajid Ali Shah's plight who is shown as a sympathetic but debauched character, who takes what he gets from the Company without creating any furore. This king loves his arts too much to indulge in battle. This king has realised that he is incapable of keeping a kingdom. This king has realised that he has been royally duped.

Ray had the knack of choosing his actors with utmost precision. In Shatranj ke Khilari too, he does the same. Every player is fantastic. Every emotion is superbly flawless. Every dialogue is crisp, laden with inner meaning and fluid. The best part is that Ray does not make Attenborough resort to disfigured Hindi. His dialogues are in English and are effective and pointed. And it's awesome to see Tom Alter (who has been otherwise wasted in Hindi films) play Captain Weston, the aide de comp of General Outram and the interlocutor between his General and the natives. The Urdu language used, is as usual poetic and flows like a gurgling brook. 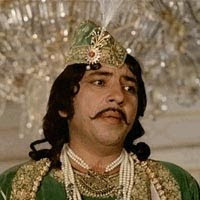 I always thought that Amjad Khan was under-utilised in most of the films he did. But this film is a refreshing change. Khan plays Wajid Ali Shah so dexterously, so flamboyantly that you actually realise that this man is capable of so much. The wronged look he gives General Outram when the latter comes for an interview regarding the new abdication treaty is awesome. That questioning look is simply remarkable!
The British were ambitious and could go to any length to attain what they set their eyes on. No matter who or what the pawn is the Company worked fast to strengthen their hold on India and widen their grasp over it.  Ray's masterstroke in the film comes when he shows Mirza and Mir playing chess with tomatoes, lemons and betelnuts when Khursheed steals the pawns from her husband's living room. Though funny, it is significant in portraying the harsh truth that no matter what the means are, the Company will not stop unless they achieve their end. For them, the game just goes on and on...
Posted by Sharmi Adhikary at 06:09