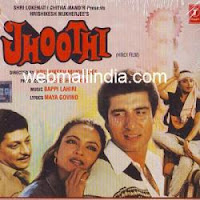 Rekha's on a rampage in Hrishikesh Mukherjee's Jhoothi.  Not that in her other films she is any bit dull or drab, but in this comic caper, she is just so boisterously marvellous that you cannot help but glue your sight, smell and every other sense on her. Playing the tomboy Kalpana, she dons the role of a pathological liar. But the difference between her and a wicked weasel is that she lies for a purpose--always a good one. Her lies helps long lost friends meet, helps her sister evade an unwanted alliance and charts an escape route for herself from a sticky situation. Most importantly, this habit of hers helps an innocent from being sentenced to death.

What is awesome about this role of Rekha's is that she is the least bit apologetic about lying to everyone left, right and center. In fact, she boasts of this quality of hers and how it negates all sorts of misunderstandings and helps people from getting hurt. I say, if pathological liars need to exist in today's world, what fun it would be if are indeed like this Kalpana!

Kamal (Amol Palekar), an honest police officer comes home one day and orders the servant to lay the dinner. He will be eating alone as his mother (Shammi), and his sisters Alpana (Prema Narayan) and Kalpana (Rekha) have gone to Khandala. But the servant tells Kamal that Kalpana was suffering from a headache and hence did not go with her mother. He is anxious and goes to meet Kalpana upstairs. Kalpana, in a gloomy and weepy voice, tells him that she is waiting to give him a disturbing news. Kamal's friend, Ramesh met with a ghastly accident in the evening and was counting his last breath. She makes Kamal rush to Ramesh's house. On reaching Ramesh's house, Kamal realises Kalpana's prank. She fibbed because she wanted Kamal to go meet Ramesh, who was his best friend and because the two had not met for a long, long time. A lie that brings together two dear friends, how bad can that be? This is what Kalpana tries to propagate--that it is indeed not bad to tell a lie, only if it is to do something good.
Every premise of Kalpana's lies is extremely funny. Like how she lies about her lost necklace to her family. She had only tried to help her poor friend Basanti by mortgaging it. BUt the way she makes a hue and cry about the lost good is rather funny. In fact, this is not a case of uproarious laughter. What Kalpana's actions induce is a chuckle and a warm sensation of the innate goodness of her soul.This girl can do anything to help others and to make all smile.

Misunderstanding galore fill the film to the brim and Kalpana's lies create more misunderstandings. Like when Rasik (Deven Varma) misconstrues the situation and thinks that Alpana is a divorced mother of two kids! Like when Kalpana casts aspersions on Dr Anil Gupta's (Raj Babbar) character to salvage the situation for Alpana. Like when she forcibly tries to bring Seema (Supriya Pathak) and Kamal together.

What I absolutely love about this film is how wonderfully Mukherjee weaves everyday situations in middle-class families to creates this wonderful story. The words spoken resonate with a known air of domesticity, the clothes the characters wear are so identifiable, the actions they do are so everyday. Sweet love blossoms between Alpana and Rasik as well as Kamal and Seema. But what is stunning and sweet is how Kalpana experiences the first brush of romance when she meets Anil Gupta, who she think is some Nirmal because of some hotch-potch that she has created.
This handsome man in Kalpana's words looks like a Greek God, walks like Robert Redford, has a side-profile like Imran Khan and hair like Omar Sharif!! My, my, this girl is really smitten. And she is ready to go to any extent to win his affection. And win she does. In the most beautifully subtle and romantic way...
The music by Bappi Lahiri is superb. The title track has the necessary zing to it, Bas ek thodi si is naughty, Bhaga bhaga dush man bhaga has the whiff of disco. With Lahiri around that's a given. BUt the best song is Chanda dekhey chanda, a magnificent love ballad that speaks volumes about love, affection, bonding and togetherness. And the picturisation is so good. Anil Gupta through his song is professing his love to Kalpana and she is acknowledging it and returning the favour through her lines. Lovely, fresh and warm. What is even awesome is how they show Kamal's latent affection for Seema while the song is playing. Kishore Kumar sounds good but Lata Mangeshkar is on a different plane here. What is also noteworthy is how the tomboy changes into a shy young woman when she experiences love. She changes into Indian wear and even wears the bindi for that effeminate touch. Wonderfully done.
Another song is special, too. Ayaa jab se tu dil mein aya is that quintessential love ballad.
This 1985 film also has elements that is not very Mukherjee like. Elements of blood, chase and gore is put in to make the script spicier. Madan Puri plays a unique role as Professor uncle. Rasik Dave as Sunil Gupta looks good but is a green horn when it comes to acting. But otherwise the cast is fantastic. Well-rounded and appropriate. Considering that Mukherjee had a soft spot for Palekar it was a bit strange not seeing him as the lead hero.But then, Palekar is perfectly cast as Kamal and looks immaculate as the stern policeman and the loving elder brother. 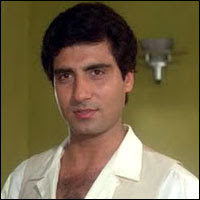 That brings us to the dashing Anil Gupta portrayed by Raj Babbar (my mother really liked him). I always knew Babbar was a fantastic performer, but here he is so splendidly restrained. He never wants the limelight to shift from his ebullient sweetheart. When Rekha praises his looks, I totally agree with her. Especially in the song Chanda, I cannot take my eyes away from him. Red shirt, black trousers and grey sleeveless pullovers add oodles to his already magnetic personality. This doctor really made me weak in the knees.
Jhoothi is however Rekha's film. Free, spontaneous and effervescent, Rekha shows that she is the diva for no mean reason. Every act of her's is perfect, every scene is praiseworthy. Even when she is with a kid in the film, you cannot afford to miss a moment. She is the hero of this fantastic family fun film.
Posted by Sharmi Adhikary at 00:31