Not a Roman Holiday (Three Coins in the Fountain) 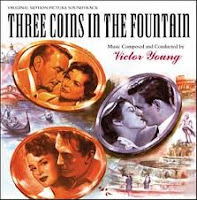 For some reason my love for Rome far supersedes my attraction for Paris. Somehow, Paris seems to be hot property, in terms of style, fashion and romance. But, in Rome I get a whiff of romance even when I pronounce the word. Or maybe because the film Roman Holiday, a serious favourite of mine, celebrates love in such a beautiful way on the streets of this wonderful city. There is a simplicity and innocence about Rome that Paris lacks, or so I feel!
Jean Negulesco's Three Coins in the Fountain is another romance that celebrates the halcyon ambiance of Rome in a glorious way. As the lead girls take a walk on the streets of Rome, they are accosted by Italian Romeos who look attractive to the teeth, Italian princes floor with their chivalry, the Roman countryside is blissful and every frame is sunny, jaunty and cheerful. So, what's not to like about Rome?

However, Three Coins in the Fountain is no Roman Holiday, despite a great start and an easy disposition. The language is free-flowing, the plot is likeable, Every street, every nook and every monument of Rome is stunning, the performances are good, but some of the characters start irking me midway through this 1954 film. The film has a great score by Victor Young, the clothes worn by everyone is classy, the girls are fun to watch and I'm sure, to be with. But still, when the end credits roll, I'm left pondering...

Maria Williams (Maggie McNamara) arrives from the US to be a secretary in the office of Mr Burgoyne (Howard St John). She is received at the airport by Anita Hutchins (Jean Peters), who herself is a secretary there but is serving her notice period as she is going back to the US to get married. When they arrive at their stay, Maria is pleasantly surprised to find that secretaries in Rome have such splendid establishments. She is warmly received by Miss Frances (Dorothy McGuire), who is also a secretary to acclaimed author John Frederick Shadwell (Clifton Webb). She has been at it for the last 15 years. Anita and Frances befriend Maria immediately, informing her about the niceties of Rome as well as warning her of some dandy Romeos. Maria decides that she would like Rome immensely. 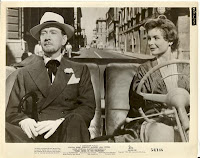 The three also visit the famous Trevi Fountain and Frances and Maria throw coins in wishing good things. Then Frances goes about her job to the Shadwell villa and Anita and Maria to office. It appears that Shadwell is immensely dependent on Frances, consulting her on every small issue. Frances too, shares her thoughts with her employer very freely. In office Anita tells Maria that Mr Burgoyne has set a rule that any two of his employees should not be romantically involved. So, while Anita is attracted to Georgio (Rossano Brazzi), she is extremely formal with him. Maria senses that Georgio too likes Anita and even teases her friend about it. In the evening, the three ladies go to a cocktail party thrown by Burgoyne where they meet Prince Dino Cessi (Louis Jourdan), the dandy with a promiscuous reputation. Anita and Frances warn Maria that she should never encourage this prince as he loves gallivanting with pretty women but is never serious about them. Any woman who goes with him to Venice, is blacklisted forever in Rome. Maria's interest is obviously piqued. When Dino greets the three ladies, his eyes admire Maria, but he is soon fobbed off by her friends. We learn that he tried to woo both Anita and Frances, but they did not encourage him suitably.

At this juncture, the director forms three couples and dwells on their romantic linking. Georgio convinces Anita to visit the countryside with him. She has fun with his family, learning about the sweet country manners and rituals. A freak accident brings them closer and Anita soon gets to know the depth of Georgio's feelings for her. She discovers that Georgio wants to be a lawyer and saving up his salary to go to law school. He loves Anita a lot but never felt that Anita would like him. While she is with him, her employer sees them together and is cheesed because Anita dared to break his office rule. 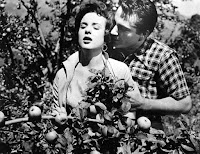 Mr Burgoyne asks Maria whether Anita is seeing Georgio and Maria accidentally tells him that she is not getting married to anyone in the US but has used that as an excuse to leave for the US. Mr Burgoyne sacks Georgio, which angers Anita against Maria. Misunderstandings creep between Anita and Maria, so the former leaves Villa Eden to go and live with Georgio. This couple is the best of the lot in the film. Anita is passionate about Georgio, Georgio loves Anita a lot. So, when in the end Burgoyne realises his mistake, on the urgings of Shadwell, it makes me happy to see the two together. Jean Peters is very attractive, too.
Frances has always loved Shadwell but she never really owned up her feelings before him. So, when she tells him that she wants to go back to the US, Shadwell panicks and asks her to marry him. She relents! How can a self-respecting woman take that for a proposal? Is she scared of dying an old dame? Isn't love the primary ingredient of marriage? After all this, Shadwell suddenly breaks off the engagement learning that he is suffering from a terminal disease. Frances is struck but she hardly says anything. Her show of protest is so lukewarm that it irritates me. She gets drunk and behaves in a juvenile fashion. What becomes of this couple is very unclear...

While the affair between Dino and Maria could have been so Mills and Boon-ish, it peters out rather tepidly. Dino manages to take Maria to Venice, but his catch is guarded by Frances. So, his conquest is not made on the first trip. But Maria is intrigued and wants to get involved with the rich prince. If the director had shown her being attracted to the handsome man, I could have understood her plotting and planning. But from the very beginning, Maria is shown to be interested in his riches. She queries about his palace and is visibly pleased to know that he is not married. She takes a dirty route to gain his affection. I would rather call it ensnaring. She connives appropriately to learn his taste in music, in art, in food and even tries to show that she loves playing the piccolo. While I had begun thinking that Maria is a pretty damsel, at this point I don't quite like her. She looks manipulative and behaves more so. When Dino's mother reads into her plans, I clap and want Maria to shown the door. The flicks on her forehead are given to make her look as waif-like and innocent as Audrey Hepburn, but girl, you have a long way to go!

After all these manoeuvrings when she does admit to Dino that she has been untrue so far, I really love it that Dino is displeased with her. So, when Shadwell reasons with him that he should forgive Maria and go meet her, I feel like screaming, WHY??? This couple too, though is the lead, fails to touch my heart...
The ending too is rather lame and abrupt. While Anita and Maria are leaving for the US, they are reunited with their partners. But does that mean that they stay back? Do they realise that Rome isn't that bad... What happens actually? Questions, questions, question, galore...

Posted by Sharmi Adhikary at 04:29