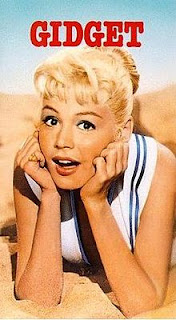 Ever since I discovered Sandra Dee, I've liked her quite a lot. She is cute, sometimes pretty, ebullient, spontaneous and has a childlike innocence about her. Her romance has the bubbly effervescence that is absent in most heroines. No wonder she was so apt for those ingenue roles. Like in Gidget, where she starts of as a 17-year-old tomboy so unaware of the matters of the heart, but soon been struck by Cupid and doing the most adorable little things to make the man jealous. This 1959 film may be having sequels and TV remakes, but the fun in the original is unadulterated. Sandra Dee is adorable here and makes this sporty romance, directed by Paul Wendkos, a delectable joyride.

Francie Lawrence (Sandra Dee) is nicknamed Gidget, a portmanteau for Girl+Midget, but she turns out one hell of a woman when it comes to matters of the heart. A sweet, sensitive soul, she goes the whole hog when she has to secure the man she falls hopelessly in love with. Back home on a holiday from school, she is tired and frustrated to go 'man-hunting' with her girlfriends. She laments the times when girls had fun without the inclusion of boys and longs for those days to come back. But her friends would rather spend time making catches and grabbing the attention of young boys while gallivanting on the beach. It is here that Francie is rescued by Moondoggie (James Darren), one of the surfers, while she is almost drowning during a swimming expedition. She is struck by the fun sport of surfing. She immediately decides to learn the sport much against the taunts of her ditsy girlfriends and the reservations of the surfing boys. But our Francie is headstrong. She finds an able coach in Kahuna (Cliff Robertson), a free soul who confirms that he has no attachments with the world and spends his days surfing, lazing on the beach. His nights of course, are for the wild parties! 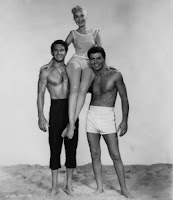 While all the boys constantly tease her for being such a little girl who is unaware of the ways of the world (read sex and seduction), Gidget seriously pursue surfing and goes on to become a master of it. Slowly all the boys warm up to her friendship, including Kahuna, but Moondoggie is a bit wary. He keeps his distance and often hurts her with his gruffy exterior. But these are the beginnings of the sweet attraction that will blossom in the teenager's heart for this handsome boy. It's awesome how Dee's eyes will melt whenever she sees Moondoggie. Yes, James Darren is quite dishy in a very no nonsense kind of way. Washboard abs and jet black hair do an awful lot of good to him! And when he sings, ohhh...
While Gidget is having fun with the boys on the beach, her parents, especially her father, is worried sick of his darling doll. He wants her to meet Jeffrey Mathews, his friend's son, but Gidget says she hates dates. Wait till you find out who this Jeffrey is!

Miffed with Moondoggie's brusque behaviour, Gidget soon discovers that she has fallen in love with this youngster. She feels a sledgehammer hitting on her head and a thousand bells tinkling in her mind. She confesses to her mother that she feels weird nowadays but does not know what to do when Moondoggie is around. She tries to grab his attention but she fails. That is when she ingeniously decides that it's about time that she makes him feel jealous. And this is where the fun starts... 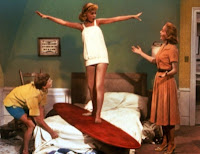 Well the film is fun from the start, but it is with the sudden blossoming of this teenager into a young woman that the film takes a beautiful turn. Suddenly, Gidget stops looking like a bubble teenager and enters a world of prettiness. The dresses make her youthful and beautiful, her banter is mature and engrossing and her pining for Moondoggie is a delight to watch. The scene where she tries to get cozy with Kahuna is interesting and well-executed. Great turn of events, for sure.

In all, Gidget is a romance but it is unconventional in its treatment. The heroine is a tomboy and slowly blooms into a pretty young thing. The hero is not overtly romantic. He realises gradually that he loves the girl and shows his protectiveness subtly. The parents are indulgent yet don't spoil. The father is funny and affectionate. The mother is caring and a dear friend to the daughter. Kahuna is not just an able coach, he is a sound guide to the matters of the heart.
The bonus here is that we get to see surfing, a sport that is hardly seen in films. In 1959, this must have been a subject that was least experimented with. The beach parties look fancy and the atmosphere is all bright and sunny! 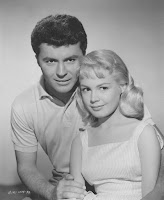 But the best part of Gidget is Sandra Dee, a bubby delight as always. I wonder whether the sequels were as entertaining considering that Dee never reprised her role as Gidget in them. I doubt. She not just looks lovely with Darren, but even when she is alone, she is an enjoyable personality. Her voice has the musical timbre and her gait the bounce that makes things so catchy. She is au naturale on screen and looks as if she is living the role. When she is upset, her face has that measured sadness and listlessness, when she is happy, there is a spark that lights up her blue eyes. She looks perfect in those swinsuits, her waif-like frame immaculate for the sport she is shown to have fallen in love with. She is like a excited child when she talks about anything. Framed by her shiny blonde mane, Dee's face is good enough to add cheer to any dull day...
Posted by Sharmi Adhikary at 07:32