Choosing the right one (Holiday)

I'm currently riding the Cary Grant wave! Yes, I'm going to review yet another classic starring the dashing Grant. And not just this, I have one more super romance lined up where he is cast opposite another lovely lady; a Swede star who rocked the American movie industry during her times. Well, that doesn't end it. I've recently discovered some of the most well-known but difficult-to-lay-your-hands-on Cary Grant films that are making my downtime well worth it. Generally I love being busy with work. But at the moment, when my hands are not very full with assignments and travel (Come December and my life will be transformed into a hectic caravan!), I'm squeezing in a good film every opportune moment! Ah! The magic of old films...

I'd never watched a film starring the legendary Katherine Hepburn. I used to believe that she was related to Audrey Hepburn (why on earth would I think that the former was the latter's mother!?!?!), but learned recently that they might be just distantly related. While reading up on Katherine Hepburn, I came across the 1938 George Cukor directed Holiday and sat down to watch it. Well Katherine was already 31 when she did this and please forgive me for saying this; she looks a tad worn out. But that's all the criticising I'm going to do. For, from the very start, teh film had a freewheeling quality that is enjoyable and enticing. But once the mid-point is reached the script delves on the more serious issues of the venality of the rich class, the shallowness that they suffer from and ultimately how two souls abdicate the life of riches to start a journey of self-realisation, love and freedom. Katherine Hepburn was fantastic as the free-spirited Linda Seton and Cary Grant was superb as Johny Case, the young man who grabs Linda's attention with his righteousness and self-esteem. 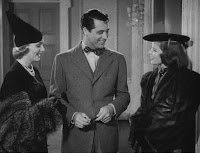 The film starts with Johny meeting up with his friends, Professor Nick Potter (Edward Everett Horton) and his wife Susan (Jean Dixon) and revealing to them that he is soon to be married with the sweetest girl on the planet called Julia Seton (Doris Nolan). When the good-natured and caring Potter couple arm-twist Johny to tell them everything about Julia, all he can say is that he loves her and is going to marry her. He is not sure of her family and is going to meet her father today. The Potters see this as a passing fling and cheer him on.
It's funny how Johny puts his worries behind him with a jaunty somersault. But surely there are more graver worries to deal with in life. Johny is a gifted professor and though his seniors have pointed out that one day he will earn plenty with his talent, he has to work the hard way to achieve success. But the honest and diligent man that Johny is, he definitely does not believe in shirking away from his responsibilities. And he trusts Julia has fallen in love with him for the man that he is. He is also planning to go a holiday with her and his friends.

When he reaches the address that Julia has given him, he is astounded to find that it is a sprawling multi-storey mansion. He thinks that Julia works here but is further flabbergasted to know that Julia is the younger daughter of the owner of this mansion, Edward Seton (Henry Kolker), a stern man with a mind of his own. The Seton family is getting ready to go for the Sunday service at church and Julia tells Johny to come back sharp at 1 pm for lunch with her father. Julia's fanciful rich ways become apparent when she chides Johny for wearing a common neck-tie. She wants him to appear flashy so that her father is impressed by how dapper he looks. Johny of course doesn't really care too much for that. Julia then introduces Johny to Linda (Hepburn), the 'black sheep' of the family, who never goes to church and is quite notorious for being so different from the other Setons. She only has a friend in Ned (Lew Ayres), the brother who is always drunk but who is more sensible than the ones in their senses! He loves Linda and understands her thoughts and actions. When Julia and Mr Seton is busy finding faults with Linda, he is the one who is compassionate and eggs her on to follow her heart. The two spend most of the time in the play nursery, where Linda and ned have some beautiful memories of their mother and childhood. Linda takes Johny to that room and shows off Ned's musical instruments and remarks that Ned could have been a wonderful musician if he got the right support. She finds Johny rather agreeable and tells Julia so. She prays that the father agree to the match and then she would throw a lovely but private party for Julia and Johny in the nursery. She loves her sister and is ready to make her happy at all cost. 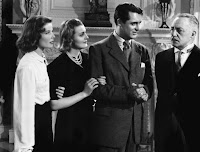 Till here the film is funny and light. But from here the director shows the true nature of everyone in the film. Ned hides his disgruntled self from everyone, Mr Seton is authoritative and is quite a bully. Linda has a sensitive soul that she bares to only those who understand. She feels claustrophobic in this house and is waiting to fly free. She hides plenty of sorrows in her heart and it's difficult to comprehend what's in her heart when she faces you with the smart and sassy front. She is stylish and attractive, yes. But there is a soft dimension to her that only Johny and the Potters could gauge.
A stark surprise is Julia, the woman who Johny had declared to be sweet. No, she is anything but that. She tries to force Johny to agree to her father's conditions and behaves in a brusque manner when Johny tries reasoning with her. Surely, she is not looking for true love. She just wants a handsome man who can chaperone her around while she regales in her father's  riches! Ridiculous. 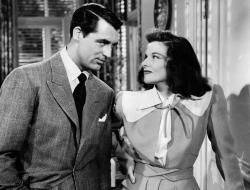 And after seeing the true side of Julia, it's really remarkable how Johny decides against the marriage and embarks on his holiday. He sees the difference between the vain and uptight Julia and the fun and spirited Linda. But the brownie points go to Linda for brushing aside all inhibitions and going to get her man when she realises that she loves him dearly. This time she does not bother about what her selfish sister will feel or what the world and her father will say. If all these years they have not been able to fathom why she chose to be the 'black sheep' even today they will find her actions confusing. So, it's better to just do your work quietly. She stuns her sister with her remarks and runs out to be with her Johny, cheered on by her brother Ned. The last scene is fabulous. As Johny somersaults to show the Potters that he is not sad anymore, Linda walks in and inquires, "So does the club meet here?" The Potters slip away, Johny pulls her to him and they kiss... 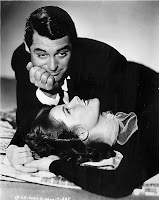 Gary Grant was young and handsome in Holiday and his character development was handled very well in the film. 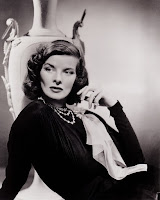 But it was Katherine Hepburn that made this movie so enjoyable. Her witty retorts, her class and elegance, her measured display of emotions, everything made this Linda so fascinating. I must say I'm impressed by Katherine Hepburn's persona, her chiseled features and alabaster skin. Her voice was strong even in the times when her stern guardians were cornering her. What is remarkable was how pragmatic she was. She realises pretty soon that she is attracted to Johny but does nothing about it because of Julia. But the moment Julia brushes him aside and doesn't regret her own actions, she slaps her selfish sister with her words and rushes to get the man of her life. And this exactly what a modern and brave girl like Linda would do...
Posted by Sharmi Adhikary at 05:39