Diary of an actor (Nayak) 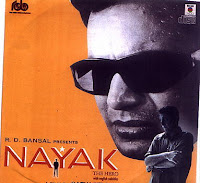 In a tantalising move, Satyajit Ray keeps the visage of his protagonist undisclosed till the time his friend questions whether a successful actor is enough to pull off a bad film. The moment Jyoti remarks, "What else does the film have except you?", the camera quickly focuses on Arindam Mukherji's face and with a confident expression, he says, "What else does it need?" 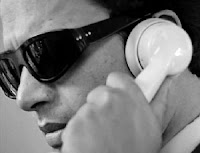 With such a beginning, it is but obvious that we will be encountering a character who is infused with a melee of shades. And true to the promise, Ray sketches his hero in Nayak with some glorious shades of grey that require much heeding. At one point he deserves sympathy, at another he can very well be passed off as pretentious, egotistic as well as malicious. Good or bad, there is no denying the fact that Arindam Mukherji is an attractive personality. Every aspect of his character is so unique and interesting. Just like the growth curve of his career that has seen so many crests and troughs, his persona is one of revelation and magnetic charm.
With his deft labyrinthine approach Ray, the master that he was, created a film which delves into the life, insecurities, fears and loneliness of a superstar. This man who has a popular public image is so different in personal life. The way he has charted his career growth is a wonderful chapter of study. Depicting human vices in a subtle yet sure manner, Satyajit Ray makes Nayak a mindblowing cinematic venture. And I have no qualms in saying that I have mustered up the courage of writing about the film here after three consecutive watches. Yes, the film is like an onion. Every watch unravels innumerable layers, each pregnant with heavy possibilities of appreciation from different angles. 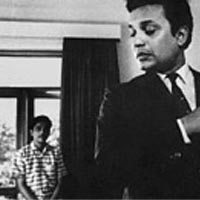 Arindam (Uttam Kumar) is escaping to Delhi to receive a distinguished award. I say escaping because his foul temper reveals that he is tired of the gossip surrounding him. He is not even flying this time. Being the most successful film actor of his times, he is taking the train to Delhi so that a lot of time is spent in travel. A snippet in the newspapers today has reported his drunken brawl last night at a posh club. And being the star that Arindam is, every body wants a slice of the juicy tidbit. So, Arindam packs his bag and leaves, telling his friend Jyoti (Bimal Ghosh) that he is better away from the din here.
The upper-middle class passengers in the first class compartment of the train are a tad amazed on seeing Arindam as their fellow traveller. And understandably there are appreciative glances, wonder-struck salutations and the usual hovering around. It's remarkable how Ray depicts the shallowness of humans through these passengers. While one man belittles an actor's trade quite bluntly, his wife gazes at him thinking what if Arindam took a fancy to her. Their ailing daughter though is a refreshing change. She only gapes at him and is happy with just an autograph.
One advertising professional (Kamu Mukherjee) is busy trying to strike up a deal with a rich businessman. And the slimy weasel that he is, he will not stop at anything. He is even ready to pawn his wife's honour to make his target sign on the dotted line. His strategies reek of hollowness when he sweet talks his wife Molly into giving sexual favours to his client. And yet, when the wife asks him to talk to Arindam so that she can enter films, he considers that deplorable!!! Hypocrite! 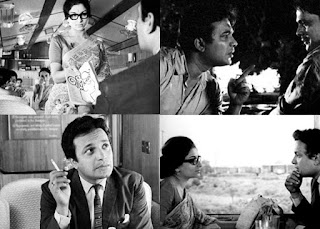 Arindam, presenting a perfect heroic stance before all these people, gradually lets his guard off in front of Aditi Sengupta (Sharmila Tagore), the editor of a woman's magazine. But the cynic that he is, he fobs her off initially by his high-nosed stance, when she comes to ask him for an autograph. Not that Aditi is crazy about this screen star. She has been egged on by her friend, a petty housewife who preys on gossip. That she has read the morning snippet is evident. And now she wants to use Aditi to get to the root of the matter. But Aditi, the celebral woman that she is, will only act according to her mind's logic. And thus ensue a fascinating series of flashbacks of Arindam's rise and thereby, his isolation. 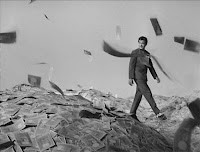 Arindam might be sitting on a throne now, but at what cost. He has no dear ones with whom he can share his secrets and sorrows. His dreams are scary and disturbing. Drowning in a quicksand of banknotes cannot be a pleasing image. And that too, when the cadaver of Shankarda, Arindam's mentor, declines to rescue him. Most importantly, Arindam's words bring out the cynic in him. A failed affair, bitter struggle to reach the top and the constant insecurity of being dethroned has left him weak and dejected. What the public see is just the sheen of popularity. Inside, Arindam is a lonely man. And his story could well increase the circulation of Aditi's magazine. After all, a tete-a-tete with the very successful Arindam Mukherji is what every journalist can dream of.
While Aditi is surreptitiously jotting down whatever Arindam says, the actor bears his heart out to the woman who he sees as a sensible person. Or should we say enigmatic? Their war of words is fabulous and so is the power play between them. While Aditi tactfully gleans out the stories from him, Arindam gradually succumbs to this intelligent woman's bait.

A talented theatre artist, Arindam sells out to films after the death of Shankarda (Somen Bose). He decides that Shankarda must be wrong, or rather he sets out to prove that film actors are not just puppets in the hands of the movie industry, the belief that Shankarda had instilled in him. Fame and wealth welcomes Arindam with open arms and through his actions, we see how the person in him changes. Forced to maintain his popular public image that will not brook controversies, Arindam even denies help to some needy friends. And, his character graph hits an all time low when he extracts revenge from a senior actor called Mukunda Lahiri (Bireshwar Sen), just because the latter had insulted him in his struggling days. Whether Arindam was right, or whether he should have risen to the occasion and helped this infirm actor, is a subject of crucial debate.
Then comes the topic of Arindam and Promila (Sumita Sanyal), the fiercely ambitious woman who seduced him to get into films. Did Arindam have an affair with her out of his own free will, or was he duped into the relation? Anyways, once bitten, twice shy, Arindam asks Molly to send her husband to talk to him when she seeks his help to get into films. Obviously the clever man that he is, Arindam will not burn his fingers once again. 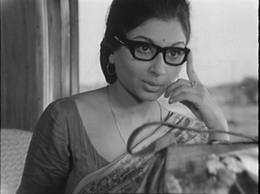 A thread of despondency and loneliness runs throughout Nayak. But when in the end, Aditi recognises the loner in Arindam and respects his privacy, the film suddenly feels so positive. After all, here is a woman who understands our hero. That he is a real person outside his onscreen avatar, is something that Aditi realises. And perhaps, that is why Arindam finds it so much easier to open up to her. In the end you see the triumph of human trust and bonding, leaving you with a secret hope of seeing Arindam conquer his travails...
Sharmila Tagore became a totally different actor in Ray's hands. Confident, natural and absolutely spectacular. As Aditi she draws a brilliant line between play-acting and spontaneity. And every time she blushed or smiled in the film, you will find your breath been taken away. Another reason why Arindam, inspite of himself, is drawn to talk to her... 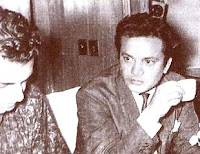 Ray generally cast Soumitra Chatterjee as his leading man, in almost all his films. But as I read up on Nayak, I figured that the director wrote the screenplay keeping Uttam Kumar in mind. While every Bengali would love to believe that Ray did not want to tamper with the Bengali sentiment of regarding Kumar as the one and only Mahanayak, there is more meat to the matter than this. If you carefully watch Uttam Kumar, you'd find him slip effortlessly into the role of Arindam. So much so that he smudges the lines between Arindam and himself. Every line is perfect. Every expression is immaculate. Even when he jokes with an elderly columnist, there is veiled sarcasm in his voice. Initially he appears as being too full of himself, conscious of his star status. But slowly when the garb falls, you recognise the loner in him, the pain that swallows him every single day.
So, whether Soumitra Chatterjee is better than Uttam Kumar in the history of Bengali cinema, I believe this 1966 film puts a stop to the debate quite boldly, flamboyantly and emphatically...

Posted by Sharmi Adhikary at 11:55