Back to nature (Aranyer Din Ratri)

Can city souls really be at peace in the vicinity of raw nature? I suppose, even though we are tired of the hum drum of chaotic city life, we somehow have grown so accustomed to the din that too many hours spent in the quietude could tire us out totally. A few weeks back, when my husband and I were spending time in the backwaters of Kumarakom, accompanied only by the lush surroundings and the buzz of insects, there slowly came a moment when both of us wanted to get back to civilisation. The restlessness ultimately forced us to truncate our backwater leisure and rush to the posh surroundings of Taj Kovalam where luxuries abound and most importantly, I got to watch television!!
Yes, we city-breds can be strange. Full of paradoxes and such great subjects of study in behavioural complexities. So tired of the city, yet so very fond of it altogether. 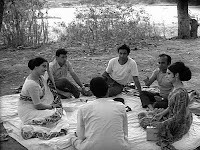 Satyajit Ray in his Aranyer Din Ratri, a classic study of human nature (based on Sunil Gangopadhyay's acclaimed novel of the same name), toys with a series of human behaviours that we are so used to seeing every day. Four friends put a speed-breaker to their lives in the city to enjoy a tiny relaxed vacation in the woods of Palamau in Bihar. Four friends, diametrically different from each other, depict different aspects of human nature. While away from the 'polished' world of the city, their grow to face some crucial facets of their personality that they did not think about in much detail. A spectacular character study on the part of the director opens up a world of emotions and behavioural patterns that make this film a rare masterpiece. A melange of human vices and character deformities are dealt with with so much subtlety that one will rarely feel it's a film. Aranyer Din Ratri is a vignette of life, a kaleidoscope of emotions, actions and a methodical study of the deep recesses of the human mind. 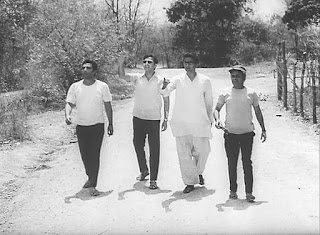 Interestingly, while the four friends, Ashim (Soumitra Chatterjee), Shekhar (Rabi Ghosh), Sanjoy (Subhendu Chetterjee) and Hari (Shamit Bhanja), escape the city to rejuvenate themselves in the woods (and spend some moments in introspection), as soon as they realise that a village life is bereft of the trappings that they have so grown used to, they long for a slice of civilisation. Ashim is a promising executive, Sanjoy is a labour officer, Hari is a sportsman recuperating from a dead relationship and Shekhar is the official jester of the group, whose participation in the 'picnic' is always required to keep the mood light. Ashim is too confident of himself (sophisticated and even though he might not admit it, loves his high parties and is fond of the company of women) and takes charge of all conversations and situations. Sanjoy is the conventional middle-class Bengali bhadralok who cannot be expected to act out of the ordinary. Hari is impulsive, hot-headed and wears his heart on his sleeves. Shekhar, though seems absolutely at ease all the time, constantly waits for sanction from his friends before performing any action. For instance, when they 'break into' (tired of the rules that they are so bound by in the city, the four friends forcefully put up at the Forest Bungalow without an official reservation, thereby jeopardising the caretaker's position) their temporary abode, Shekhar wants to shave. But, when he finds that Ashim and Sanjoy will be satisfied with a stubble, he charifies with Hari whether will do the same. Sure that Hari will also not use the razor while they are at Palamau, Shekhar announce that this is the time to celebrate as 'hippies'. Shekhar, a jobless man, but with a yen for gambling, also has inhibitions about alcohol. So, while the others let loose and get sloshed in the local wine shop, Shekhar abstains and stays sober. 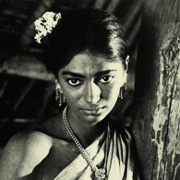 Under the influence of alcohol, we get to see these humans without the quintessential veneer. Ashim takes a dig at Sanjoy for being the hypocritical and safe-playing conformist. Sanjoy comments about Ashim''s taste for high society dos and his knack for reaching the top of the corporate ladder. In this we also find that Ashim fears that the journey to the top is not devoid of dangers. The ascent curve of his career can come down any moment. In this inebriated moment one gets to see the real Ashim, the man who tries to put up a sophisticated and confident front at all times, but in reality he also has his weaknesses and fears, the biggest being caught unawares or slipping into a false position. Hari is hurt after his girlfriend (a nice cameo by Aparna Sen) ditched him. He is not as polished and refined as Ashim or Sanjoy. His confidence is at an all time low. His manhood has been challenged by his ex. So, when he sees the rustic and attractive Duli (Simi Garewal), the tribal key to rev up his self-esteem again, he jumps at it. And yes, the hot headed cricketer that he is, he does not like when Shekhar pays the tribal women money for sweeping and swabbing for them. Shekhar, the cheeky guy that he is, loves the sight of women, even though he casually remarks that he is not interested in woman company at all!!

Devoid of the company of 'proper' women, the four friends heave a sigh of relief when they encounter the Tripathis at a bungalow nearby. A delectable game of words between each and every one ensue. Hari's childishness and simplicity is revealed during the incident of his lost purse, Shekhar's presence of mind comes to the rescue when the women in the car catch the sight of the bathing youngsters suddenly and most importantly, it's awesome that Ashim meets his match in the celebral Aparna.

While the acquaintance is initiated quite harmlessly between the four friends and Mr Tripathi (Pahari Sanyal), his daughter-in-law (Kaberi Bose) and his daughter Aparna (Sharmila Tagore), deeper connect shows how the women and their father bring out the hidden facets of the men. Hari's heart is stuck on Duli so he couldn't care less about this meeting, Shekhar is too happy because he is getting good food from his new friends, Sanjoy and Kaberi converse quite a lot about sundry things. But, what Aparna does to Ashim's calm is mindblowing. This smart and confident chap is rankled by Aparna's composure. She begins by being a charming woman to him (who he slightly flirts with in the beginning) and ends up being a beautiful revelation (who is much more than a pretty face). She is an intelligent, sharp and compassionate with a sensitivity that Ashim finds difficult to comprehend. Hence, he is progressively drawn towards her. When Aparna sees him bathing near the well, he feels absolutely embarrassed because during that moment he becomes the vulnerable party, something that is blasphemous for somebody of Ashim's personality. (Yes, he looks heartbreakingly handsome in nothing but those shorts). The second smashing of his ego comes when Aparna rescues the situation after the Forest Officer threatens to throw the four friends out of the bungalow. Surely, Ashim, the egotistic man that he is, will not be the taker of a woman's help!! 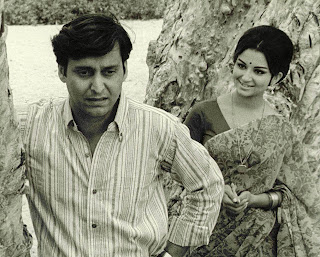 But, aware of Ashim's feelings, Aparna purposely relinquishes her victory in the memory game, only to prove that she is not trying to belittle Ashim. She is after all just trying to make a dent in his gargantuan ego. It's heartening that Ashim realises the better side of her actions and gathers up the courage to reveal his true feelings for her. Towards the end, as a bitter taste cloys our senses when Sanjoy lives up to his reputation of a coward and a conformist (by not taking advantage of a mellow situation with Kaberi), we feel positive about the prospect of a love affair between Aparna and Ashim, who is now a more educated man, thanks to this woman's bright touch.
1970's Aranyer Din Ratri can also be called a study of the power game between the sexes. There is a constant physical tension between Hari and Duli, a latent emotional bond between Sanjoy and Kaberi and of course the everlasting intellectual and sensitive power play between Aparna and Ashim. It also harps on the vices of man that becomes a part of our daily life. Ashim bribes the chowkidaar of the bungalow though as a literate individual he knows that he should not. Hari beats up Lakha a local guy, suspecting him of thieving, even though he has no proof of it. Shekhar is prone to gambling and minces no words on that. Sanjoy's words reveal that he is sycophant too his boss. Multi-layered like an onion, this film never fails to stun me. And yes, the comedy is superb, too... 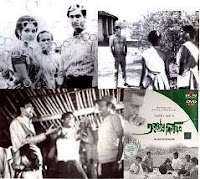 And if you have been waiting for me to comment on the performances, I might as well skip it. For when Ray, one of the best movie-makers that the world could have, directs some of the best talents of the Indian film industry, fireworks are guaranteed... This fire not only sets ablaze the forests of Palamau, it also leaves an indelible impression in the minds of scores of viewers who have cherished and applauded this cinematic work of art for all these years...
Posted by Sharmi Adhikary at 08:50