Would I be lying to myself if I said that Harano Sur is one of the best 'memory-loss' films to be ever made? I 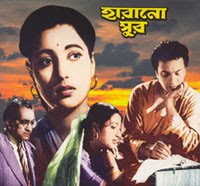 don't think so. At least, it is definitely my one of my favourite films of that genre. Not because a delicate love story is woven around the incident of memory loss, but the manner in which the happenings following the retrieval of memory bring together the man and his wife is immensely commendable. There are heartbreaks, anticipations, misunderstandings and tension galore, but what triumphs in the end is true love. And that's what really makes the journey of the separated lovers so special.

If the year is 1957, Ajoy Kar wouldn't have dared to cast anyone else in the leading roles but Uttam Kumar and Suchitra Sen. And oh boy! What an immensely beautiful pair they make. Kumar's helplessness during his illness is a contrast to his suave snobbery when he recovers. He is a man in command but somewhere in his inner recesses he keeps struggling to understand why he feels this inexplicable pull towards Roma. Suchitra Sen is poised and pretty as a picture. She is under immense pressure and trauma in being with her husband day in and day out but is struck by cruel fate because he does not remember that she belongs to him. You really have to witness the chemistry these two share on screen. It's tangible I tell you... 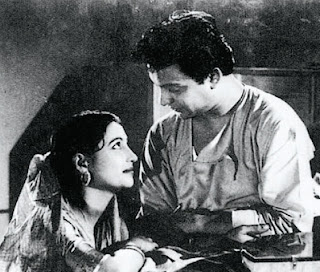 Alok Mukherjee (Kumar) suffers from amnesia after meeting with an accident. Unfortunately the asylum where he is admitted isn't dealing with him too sensitively. While he raves and rants and is under tremendous mental pain, Dr Roma (Suchitra Sen) rescues him and brings him home. Soon the patient depends on the doctor blindly and cannot make even a move without her. The dependency gradually turns into love and the doctor decides to marry the patient so that she can take better care of him. Roma's father, played with balance by Pahari Sanyal, blesses the duo and the two set off on the journey of love and commitment. Here we have the stunning love song Tumi je amar, sung fabulously by Geeta Dutt. Somehow I always liked Hemant Kumar's music better in Bengali films. Just imagine the scene (if you haven't seen the film yet). Uttam Kumar in a silk kurta and dhoti, is resting his head on Suchitra Sen's lap. She is dressed as a bride and is breathtaking. She vows to love her beloved forever and sings that as long as he is with her she doesn't need anything else from the world. Ah! Pure bliss to the senses...
But the happiness is short-lived.While going to the post office one day, Alok meets with an accident. 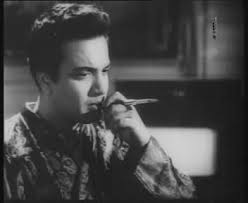 Immediately, his memories of his past comes rushing back and Roma and his present life slips into darkness. When Roma's servant calls out for him on the road, he shrugs him off with a "who are you and how dare you call me" look. Might I add that no-one else in the Bengali film industry so far has been able to get this look! Yes, Uttam Kumar made this smugness his signature and he pulled it off with so much panache. So, while the servant is left wondering why he was given a cold shoulder, Alok hails a cab and go to his actual home.
Cut to Kolkata where Alok is actually Mr Mukherjee, an heir to a large business empire and only son to a rich widow. He is dapper and stylish and loves living a good life. He bosses a sizeable office and people dare not mess with him. One day, after much trials and tribulations Roma comes to meet him. She has in fact seen the advert in a newspaper asking for a governess for Mala, Alok's little neice. Roma is expectant about the post so that she gets to be near Alok. What she wants is that by her actions and conversations, Alok recalls the time he spent with her and recognises her real identity. Luck favours Roma this time and she gets the job. While Roma starts keeping a tab on Alok's every move, her overtures are seen as opportunistic by Alok's fiance, Lata, a rude stand-off-ish woman (who is not even good looking!). Roma tries her best to trigger past memories in Tumi je amar on the piano. She is happy to see that Alok is visibly uncomfortable. He paces upstairs to his room because the tune faintly triggers a reaction in him. He is intrigued by Roma and finds her interesting. What is fascinating is that Roma depends on true love and its magic to win Alok back. She does not put forth her demands point blank. (The song Aaj duti poth defines how Roma feels helpless that the lovers have drifted miles apart but perhaps soon the bad times will tide over). She wants him back out of his own will and in a respectful manner. He starts drawing towards her involuntarily, to the utter displeasure of Lata, who turns every brick to get rid of Roma from the Mukherjee household. It's such a rivetting drama in here to see how the separated lovers unite again... 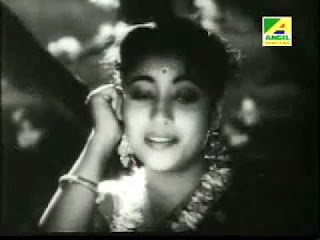 Alok's mind and even questions him out of turn, but her efforts are seen as overt curiosity by Alok who also rebukes her for it. Roma recoils in her shell but silently continues with her efforts. What is likeable about her is that she does not go out of her way to pummel Alok against the wall so that he is mentally disturbed again with her demands and queries. She quietly does her duties (praying hard that God helps her to get back her husband) even while nudging Alok effectively to see whether his mind does at all remember the shreds of the life he had with Roma. For instance, during Mala;s birthday party, Roma plays
Apart from the wonderful screenplay and the cinematography (close ups of the faces of the leads to depict 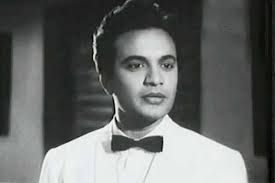 the array of emotions in their minds), the film is a celebration of love and its power. And of course it is a treat for all Uttam-Suchitra fans. Kumar is fascinating to watch. He starts off being the distraught patient but is soon the man on whom all eyes are set. The turmoil he goes through when he is near Roma is so well etched in his eyes. He feels a pull towards her, but knows that she is forbidden fruit. Then what is this attraction he has towards her. What are these faint memories that his mind is suffused with whenever she is near him. Why on earth is this woman working as a governess when she could easily be a doctor. Is she playing tricks with his mind? Kumar and his vast reserve of emotions will compel you to fall in love with him. 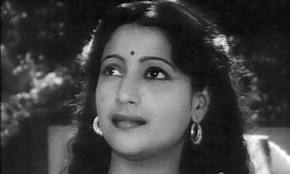 But no matter how dishy the man looks, I believe the film belongs to Suchitra Sen. She simply walks in beauty here. How wonderfully she slips from the role of a doctor to a sweetheart and then to a searching wife. She silently suffers but is not ready to let her love be tarnished. She badly wants Alok back but not at the cost of her own self-respect and honour. I love it when she whiplashes Lata with her fast retorts. Suchitra Sen's eyes speak volumes in the film. Her joys, sorrows, mental upheavals, storms, disappointments, determination and lastly happiness when her prayers are answered, it's a veritable canvas of emotions of all colours and intensities. Her integrity and perseverence simply makes you pray along with her so that her efforts bear rich fruit...May she win back her one true love...

Posted by Sharmi Adhikary at 11:39