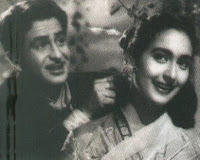 There are two things I simply love about Hrishikesh Mukherjee's Anari. Mrs. D'sa's magnanimity and Arti's luminosity.
I have never witnessed Lalita Pawar playing such a caring yet stern old woman. She has a heart of gold in this 1959 classic. While she is mostly known for her plotting persona on screen, here she is a warm Christian lady who showers her love and blessings on her orphan tenant. This time when she contorts her face, it thrills you one moment and melts your heart the other. Her eyes glisten with love, not deviousness and she displays the qualities of motherhood to perfection. It's also the very talented Mukherjee's credit to zero in on Pawar to be Mrs. D'sa. You see her in a vastly different light and get smothered by her affections.

The other spark in this story about a simple and honest man is Nutan, who plays the ebullient Arti. It's no secret that I am forever mesmerised by this actor but in this film she is simply terrific. The deftness with which she balances joy, mischievousness and melancholy, is inexplicable. There is a scene where Rajkumar comes to meet Arti in her bungalow...he is dumbstruck when she appears before him. I am speechless, too. She is almost like a vision. Her expressive eyes light up at his appreciation, her face is like a flawless painting. Her curly locks envelop her fair temples and she is breathtakingly attractive. And, when she flashes those pearly whites, no poet can stop penning love couplets...
As my friend says, "God, those days heroines had to be really good looking, considering how cruel the camera was." Nutan, I feel epitomised ethereal beauty. Her face was so malleable to emotions, nothing looked forced. And, it's not that she was taking refuge in makeup. With minimum greasepaint, simple attires to highlight her lissome frame, here was one woman whose beauty was beyond words...
And so was her acting. In fact, in Anari Mukherjee makes Nutan do comedy. And boy, does she make you laugh. Her antics are innocently funny. She prances about in the comic sequences with utmost dexterity. In the romantic scenes she is sufficiently tender and in the sad parts her melancholy makes your heart ache. Such was her repertoire...
Mukherjee's Anari tells the story of a common man. Struggling in the face of unemployment and poverty, Rajkumar's only hope is the unconditional support he gets from his landlady, and later from Arti, his love. Raj Kapoor's performance is extremely sincere (he is very convincing, hence, he garnered a Filmfare Best Actor award). His walk has his characteristic Chaplinesque style and his talk, the utterly good-natured softness. Mukherjee depicts an incredibly honest man bearing the brunt of a dishonest society. But Rajkumar's plight isn't sorry forever. He does see good times. The ending, though happy, comes after a lot of conceit, travails, tragedy and misunderstandings. But it's happy nevertheless...
Anari has some lovely songs (Shankar Jaikishan won a Filmfare for their work in this film). The best is of course, the romantic Woh chand khila, woh tarein hasein. Nutan's pretty face and exuberance makes it all the more joyful.
Lata's mellifluous rendition of Tera jana is mindblowing. The highs and lows of the notes are remarkable. Couple that with the afflicted face of Arti, and you have a winner.
I beg to differ on one point. Mukesh won a Filmfare award for the track, Sab Kuch Seekha. I feel, apart from the poignantly hardhitting words, the song hardly stands out. The music of this song pales in comparison to the other numbers, the picturisation though, is noteworthy. Rajkumar, the poor man, faces hard truths about his rich beloved and sings his heart out admiting that he has indeed been a fool. Cleverly executed...
Raj Kapoor exhibits his true mastery in the song Kisi ki muskurahaton pe. He is effortlessly simple and loving. His actions in the song portray many ironies of life. He does not care about the awkwardness of his gait, his dance and his short trousers...He just performs with elan. No wonder why, over the years, film lovers from across the globe have been lauding the talent of this charismatic showman...
Posted by Sharmi Adhikary at 23:44