Edge of the seat (Gumnaam) 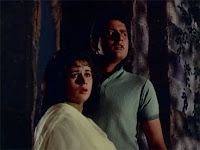 he plot gets tighter, with every scene the incidents more grim. But no one's complaining. This is one story that grips you from frame one. With sleek execution, a taut storyline, Gumnaam is a nailbiting murder mystery. And yes, there's Gumnaam hain koi and Hum kaaley hain to make the chills last...
Adapted from Agatha Christie's And Then There Was None, this 1965 thriller is a tingling take on murder. The director groups up eight personalities from various walks of life and starts bumping them off one after the other in situations that are scary and thrilling at the same time. So, while the foolish Dharamdas's corpse is left to be discovered amidst some old stone statues, Helen's lithe frame hangs from a tree!!!

While Pran is stabbed from the back, the Doctor's body is found floating in the river!!
All this and more, confound viewers to no end. Sometimes you want to suspect Manoj Kumar, sometimes you feel like nabbing Pran (given his devious glances). But, in the end, when the true murderer surfaces, you fall off your seat!!! How is this possible?? But, yes, that's what Gumnaam does...it is like an onion peel, with layers of lies, deception and conceit.
In the otherwise gloomy scenario, Mahmood is like a shining star. He makes you laugh with his irreverent humour and smart one-liners. He is earthshatteringly funny, his quick swaying walk, his attire, his hairstyle, his moustache, his flirtatious overtures towards Helen...everything has attitude...It's not for nothing that he is the most remembered Hindi film comedien till date...
The best is of course, Hum kaaley hain, (interesting work by Shankar Jaikishan) the dream sequence picturised on Mehmood and Helen. It's a signature track, remembered to this day for its lyrics, Mehmood's expressions and Helen's graceful dance.
Before Manoj Kumar got into the groove of 'son of the soil' with films such as Upkaar and Purab aur Paschim, he was quite a smart chap. Here he romances Nanda with ease. He pulls of a good show as her lover who is fast on the heels of the killer!! Under suspicion from all quarters, he makes jelly of his enemies in the film and yes he has a sensuous number to his credit. Jaaney chaman shola badan is a rain song!!! Manoj Kumar and Nanda sizzle in this sexy slow number. Their expressions are intimate and the lyrics are saucy!!!
In Ek Ladki, Kumar actually dances (not very well though). Sporting a red T-shirt, he teases Nanda with elan. Considering his chutzpah in these films, it's a tad difficult to see him petering out as the man who hides his face behind a palm!!
The disappointing part is Nanda. Her face is creased, caked and tired. Her clothes are beyond chic (at least before Helen's) and her acting looks forced!! I missed her exuberance of Hum Dono and her charm of Teen Devian. She tries to fit in but Helen looks superior in terms of spunk, style and personality. Nanda is a boring drawl. Only in Jaaney chaman she manages to match up to the infectious character of the song...
If you have Helen you can't do without her shimmying. So, there's Is duniya. The song is a bouncy take how to live life king size and wash worries away. Helen's ebullient is extremely catchy!! Clad in a pink swimsuit she is delight to watch...
Gumnaam's title track is the real winner. Haunting to say the least, Gumnaam hain koi has a sinister quality to it. It heralds doom and pulls the characters towards their death. With its lilting music it ensnares, with its lyrics, laden with sarcasm and irony, it confuses...Lata's mellifluous rendition is impeccable...Every time Mehmood's sister sings this song, every night, the characters find fear fomenting in their hearts!!! And, I find myself holding on to my seat a bit more tightly...
Posted by Sharmi Adhikary at 03:02