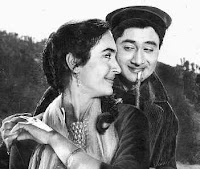 Didn't know Vijay Anand had this in him!!! A breezy, fun romance that is! Without his trademark suspense, sudden twists and nailbiting action... In 1963's Tere Ghar Ke Samne, he sheds his sleuth like qualities to give film lovers a joyful musical. And, he puts in the backdrop, a baseless rivalry between two good-natured neighbours...Though the film begins on a very Romeo-Juliet note, its end is predictable, and hence, immensely satisfying...

I remember seeing the song Tu Kahaan Mein Yahaan as a 11-year-old. It was a Sunday morning and those days Sunday used to commence with Rangoli, a collection of about six songs from Hindi classics that we gazed at with groggy eyes!! That was my first brush with the film. I could only see the film at 23. And, found it, I must say, as smooth as the song... Embellished with a unique lead cast (Dev Anand and Nutan), this film will make a niche in your heart everytime you watch it...
Set in Delhi, Lala Jagannath's (Om Prakash is warm, obstinate and funny) arch rival is Seth Karam Chand (Harindranath Banerjee plays his soft yet stern part to perfection). They quarrel like two cats but have wax hearts. Striving to belittle each other at the drop of a hat, these two rich and known men of the society want to build their own houses. The catch is that each one's house should be more grand than his enemy's abode. And, both the Lala and the Seth walk about openly, with daggers drawn at each other...inducing laughter at every gimmick, of course!!
As luck would have it, the Lala's son, Rakesh (charismatic Dev Anand) and the Seth's daughter, Sulekha (charming Nutan), fall in love... and try everything under the sun to convince their parents to bless them...After a heady mix of both unpleasant and hilarious incidents, all is well in the end...
Dev Anand is a complete winner as Rakesh. He is a talented architect who knows how to tackle every situation. Be it wooing the exuberant Nutan or handling the unreasonable demands of his father, Rakesh is never ill-at-ease.
As for Nutan, she is a delight! If she played the melancholic prisoner in Bandini, here she is chirpy and spontateous. She looks demure and classy in her well tailored clothes and very stylish with her hair tied in a chic French roll. Her eyes light up with every smile. She is very romantic as Rakesh's girlfriend and very obedient yet adamant as the Seth's daughter.
The film scores brownie points in the music department (S.D. Burman does it again)! Though the title track (picturised on a near-drunk Rakesh) is not very memorable, the other tracks are pure bliss. Tu kahaan mein yahaan shows Rakesh on the steets of sleepy Simla, yearning for a glimpse of Sulekha. The lyrics evoke the very essence of sweet separation...
Yeh Tanhai sounds very much like a Bengali ditty. The song is special because of Nutan's sparkling yet naughty expressions. Through the song she tells Rakesh that she, too, loves him. The song forges their tender relationship...
Rakesh's teasing looks in the song Dekho rutha na karo, makes one weak in the knees. When Sulekha says, Hum na bolengey kabhi, yu sataya na karo, she is angry, but is waiting for a mellow moment to melt!!!
The most hummable is of course Dil ka bhanwar. The use of the staircase of the Qutb Minar couldn't have been more effective. Rakesh's heart proposes love to a coy Sulekha and it's as if the birds and the bees sing with him. What a moment...
Tere Ghar Ke Samne is light, it requires no toil, no brainwork. But, in a very tactful manner, this small frothy film, reinstates your belief in love and patience... Short and sweet, we say...
Posted by Sharmi Adhikary at 00:17