For a film that's primarily focussing on the clash of principles between an indignant father and a self-respecting son, Hrishikesh Mukherjee's Alaap takes a winding route in building up the story. It's evenAbhimaan and Jurmana. In this film a good story is somewhere let down by the circuitous execution.

more strange because Mukherjee is at the helm of affairs here. But there is so much redundancy in the beginning before the actual plot unfolds, that you wonder whether this is the same director who knit solid tales like
Advocate Triloki Prasad is a widowed man who prides himself on the position he holds in society. He's rich, venerated and hence, doesn't mince words belittling the interest in music that his younger son, Alok, has. It's a very straight-jacketed thought process. If you have studied in college and earned degree, you give up all artistic pursuits and get down to brass tacks. A knack or a yen for the arts isn't really appreciated in Triloki Prasad's universe. He forces Alok to take serious interest in work, which entails going with Ashok, his elder brother, to the court and pick up the ropes in the industry of law.

But Alok is least bothered. On his way to the law firm everyday, Alok slips away to a colony where a former courtesan Sarju Bai (I'm pretty gobsmacked by Chhaya Devi's Hindi diction) teaches singing. 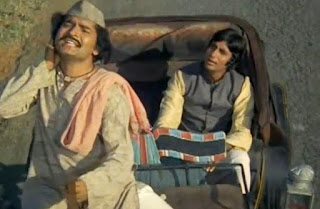 But while she is told to be the teacher, her disciples include the sole Radhia (Rekha in one of her pre-glam avatars), the sister of a tonga driver, played by Asrani. There are too many characters who bog down the speed of the story. For instance Asrani who doesn't have a meaty role slows down the pace of the film with a redundant song. His trouble tales do not add to the plot except for showing how circumstances and hardships cripple the poor.
On learning about Alok's musical escapades, Triloki Prasad creates problems for Sarju Bai and she and her tenants are rendered homeless. This instigates Alok to revolt against his father. He leaves home, starts supporting and living with his poor friends and eventually marries Radhia. But life turns messy when he contracts consumption. The rest of the story deals with how Triloki Prasad is forced to bite dust and reconciles with his estranged son.
There are several loopholes in the story. For instance, the subplot of Sarju Bai and Rajasaheb is 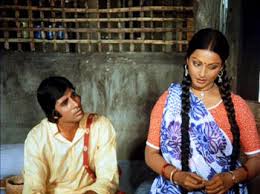 extremely fuzzy, with little or no light shed on their past and their relationship. Why is Sarju Bai so affected on hearing Raja saab's name, is still a secret to me. Sanjeev Kumar is utterly wasted here.
When Lok is extremely ill and living a hand-to-mouth existence, there is an instant where he meets his father after a fight with his wife. But his reaction doesn't reveal his angst against his father's wrongdoing. Or maybe, this is the Bachchan before his angry young man days. But I found the clash of ideals is too tepid here.
However, the film does have some great moments. The relationship between Alok and his friend (Farida Jalal( is beautiful. While he is initially supposed to marry him, the moment he is told that she loves someone else, he becomes her one true friend. The bittersweet tugs make their story sweet. 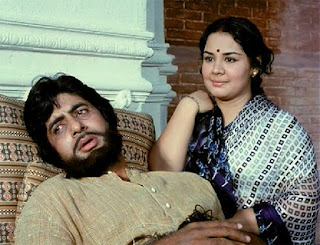 This film was before the famous Amitabh Bachchan-Rekha episode commenced so the chemistry both share in the film is very lukewarm. Rekha is good and does a commendable job of a village simpleton. But that's about it. She not given much scope here.
If there is one actor who keeps the going steady its Omprakash. Proud, vain and extremely full of himself, he makes Triloki Prasad one mean old man who doesn't have any regard for people's feelings, likes or dislikes. It's interesting to see such this actor play a martinet especially when most of the times he had to made do with light-hearted roles where he didn't have much to do except for mouth lines in a sing song tone...

Posted by Sharmi Adhikary at 10:07