I believed that Bengali filmmakers cannot make adventurous flicks. I thought that they tread safe paths. I knew that Bengali film was sweet, soft and sensitive, devoid of the drama and intrigue mostly seen in Hindi and English films. I was more used to the actors wearing the simple shirt and trousers, or maybe a dhoti kurta. The women hardly had much of a choice barring the gorgeous sari. If the director was really ambitious he made the girl wear a salwar kurta, considered to be a bold fashion statement. Even when kings and queens were being dealt with they were not as gallant or swashbuckling.
This was till I saw Tapan Sinha's Jhinder Bondi. This 1961 remake of The Prisoner of Zenda had me gaping. It's fun, romantic and at the same time adventurous. It is shot in western India, something that no Bengali filmmaker did before. It is a story set in Jhind and Jharwa in Madhya Pradesh, a refreshing setting for Bengali cinema. It shows women clad in ghagra and choli (a very sane step on the part of the filmmaker), it folds in plenty of intrigue without resorting to melodrama. And most importantly, it pits Uttam Kumar against Soumitra Chatterjee. The former a matinee God and the latter inching his way to superstardom on the strength of his performance and spontaneity. And they both go on to create sheer magic in this awesome film. 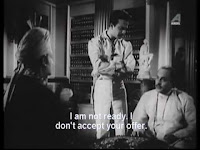 As the story goes, the general of Jhind goes to Calcutta in search of Prince Shankar Singh (Uttam Kumar). On the eve of his coronation he had been kidnapped by his greedy and over ambitious younger brother, Udit (Tarun Kumar) who aspires to be the next king of Jhind. But, as revealed by the general Udit is a cruel man and the subjects will only suffer under his regime. But, Shankar Singh, though a kind and just man, whiles away his time in the company of alcohol and music (well he does has fantastic taste in music. He listens to Ali Akbar Khan). So, grabbing the opportunity of having a perpetually inebriated brother who does not know how to protect himself, Udit, with the aid of his cunning right-hand man, Mayurbahon (Soumitra Chatterjee) kidnaps Shankar and keeps him guarded in his fort.

The general visits a posh club in Kolkata and is aghast to see Gauri Shankar Rai's (Uttam Kumar) resemblance to Shankar Singh. And this youngster can fence, too. He immediately plans that while he and his soldiers are searching to find the real Shankar Singh, gauri Shankar Rai can take his place to hoodwink Udit and Mayur bahon. Gauri jumps at this opportunity for adventure and thrill and accompanies the general to Jhind. Since he is a man in command, the palace attendants, namely Champabai (Sandhya Ray) are a bit taken aback by the sudden change in Your Highness's personality. But Gauri handles the situation with aplomb. Brave that he is, he openly dares Mayurbahon to a duel (the best part). But, there is a problem.
Shankar Singh is betrothed to the Queen of Jharwa called Kasturibai (Arundhati Devi). If Shankar Singh is not found out fast he would have to marry this woman. Fact is, he would not like to dupe an innocent woman, but the situation is rather sensitive as he is falling in love with this beauty really fast. He goes to meet her secretly in the darkness of the night and even the woman takes a huge liking to the changed man. This relation might just cost him a whole lot.
Mayurbahon has his spies spread all over to track the whereabouts of this imposter. He is sure that this 'Bangali' is an actor who is trying to fool him and Udit. But he is too shrewd for such simple games. Like his nimble feet that move when he fences (and it is declared that he is the best fencer not only in Jhind but throughout the country), his brain functions fast. And very soon, he will nab the crook.
The trap is closing in fast on Gauri, who had come to Jhind for some adventure and thrill. But now, he is a prisoner here. A prisoner of his own wishes as well the responsibilities thrust on him. Watch what he does to win his freedom again... 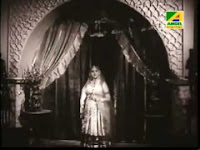 The landscape shown in the film is breathtaking. A combination of hills and valleys, the camera pans on the breathtaking views to complete advantage. Then there are the awesome sets. And yes, the costumes. Gauri does look like a king in them and Mayurbahon is surely a devious general in his dark uniform. The woman are lovely. Look at Champabai and you would know why Mayurbahon has his lecherous eyes on her. And Kasturibai is ethereal. She looks like one of those paintings that adorns walls of palaces till date. Her eyes are beautiful, her voice is husky but mellow and she has a charming personality. One look at her dignified visage and you would be able to comprehend why Gauri finds it difficult to stay away from her...
All the performances are amazing. Uttam Kumar is as usual very good. He is smart, suave and easy. Watching his transition from a mere fun-loving young man to a man who sacrifices his desires for the betterment of Jhind is great. In his dual role of Shankar Singh, he is spineless and credible. He looks good, yes, but there is someone who walks away with that baton. Yes, Mayurbahon.

Even as I write this post, Mayurbahon's cruel laughter is ringing in my ears. His tall, strapping physique is flashing before my eyes. His excruciatingly handsome face fails to disappear from my mind's eye. Yes, Mayurbahon is an attractive fiend. Even Uttam Kumar admits so in the film as he tells the general that this young lad indeed deserves to be a fellow of importance to Udit. Such is his confident personality and dashing good looks. Watch Soumitra as he slices the calm of the night with this sword, or maybe destabilize Shankar Singh by splashing his sorry face with 'sharaab'. Watch him when he curses the Bengali merchant or teases Gauri with a scheming letter. And most importantly watch him in the fencing duel with Uttam Kumar. I'm speechless. I bet you will be the same after the magnificent spectacle is over...
Posted by Sharmi Adhikary at 07:06