I have problems with Guru Dutt as a romantic lead. Though thoroughly taken by his brooding avatar (read: his angst-ridden persona in Pyaasa and as a simpleton in Sahib Bibi aur Ghulam), his lighter roles, I feel, paled in comparison. A month back, I watched Suhagan, a film where Dutt plays a middle-class professor marrying his student. Attracted to it by 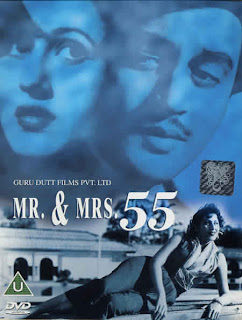 the song, Tu mere saamne hain, I sat through the film with much pain. Dutt's awkward expressions as the loverboy wooing his sweetheart spoiled the fun. Bharosa, another social drama featuring Dutt, was enjoyable only for Asha Parekh’s effortless portrayal of an ebullient village belle.
But, Mr & Mrs 55, my friend kept saying, was different.
She was in love with this 1955 romance, I gauged from her words. "A fun plot, gorgeous Madhubala, passionate Dutt and OP Nayyar's songs... What more do you need?" she said. Passionate Dutt??? I decided to bite the bait. Surprise, surprise...I liked it...
This film is an out-and-out entertainer. He pairs himself with Madhubala, the beautiful star that the nation swooned over, and both of them create magic. You have the struggling cartoonist, Preetam, accidentally meeting the ravishi 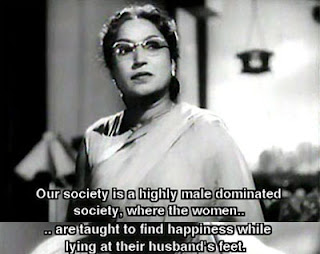 ng Anita, a rich heiress infatuated to Ramesh, a tennis player. She is foolish enough to believe that Ramesh will marry her someday and keeps pursuing him. Her aunty, played by Lalita Pawar, armed with a foreign education, is a pseudo-activist and a martinet. She dissuades Anita from keeping any kind of male company. The middle-aged lady is of the opinion that Indian men treat women as commodities and are better off alone.
Anita feels cheated when Ramesh leaves her, but sadness does not last long. This bubbly girl is extremely eager to get married, to the utter disgust of her strict aunt, who keeps harping about women’s emancipation. On turning 21, Anita is supposed to inherit a Rs 70 lakh property but only if she is married. Anita dances with glee on learning so but her aunt is not impressed at all. After all she is trying to legalise divorces in the Indian society. Hence, Pawar devises a plot. She hunts for a poor man who will marry Anita in exchange of some money and then divorce her at the aunt's convenience. That man turns out to be Preetam.
But, Preetam is not greedy. Initially expecting a proper job from Pawar, he shuns the offer of the false marriage. But, Madhubala's angelic face plays flute with his heart. He stares at her picture in Anita's house and agrees to marry her, the woman he is smitten by. And, even though he is supposed to stay away from Anita under the express instructions of the stern aunt, he keeps meeting her surreptitiously to win over her love.
The scene at the marriage registrar's office is really funny. Anita tells 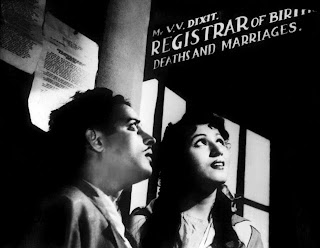 Preetam that she is going to get married to someone not very nice. Preetam knows who that person is but keeps playing to her tune. She says her would-be is marrying for money. But, Preetam knows what is true! Then she says, "Tum baitho, mein shaadi karke abhi aayi..." And then, Preetam is summoned. Anita is shocked and somewhat hurt that even Preetam deceived her. She had taken a liking to him. The song Ab to ji hone laga kisiki surat ka saamna proves that. The two catch sweet glances of each other while a rustic woman sing this folksy love number. OP Nayyar's composition is awesome and so is Shamshad Begum's voice quality.
Her hopes are dashed when Preetam also turns out to be like those men against whom her aunt has been warning her. But, Preetam won't take things lying down. Luck shines forth and he is employed as a cartoonist in a newspaper where his photographer friend Johny works (Johny Walker). This means he needn't encash the monthly cheques of Rs 250 that Pawar bribes him with to keep off from Anita.
Preetam and Anita meet at a club for the first time after their civil marriage. Anita avoids him but Preetam corners her. This is one scene I love. Mock anger in Anita's lovely eyes, moments when she is melting and then you have Neeley asmani when Anita dances with strangers to make Preetam jealous. The two do share a crackling chemistry. 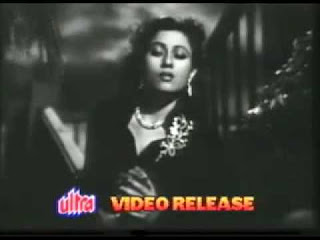 Then there is also the scene where Preetam hoodwinks Anita and forcibly takes her to his ancestral home. Boy, does this man tame this haughty girl, who needs to know a thing or two about life and love.
Madhubala is her smouldering self in Udhar tum haseen ho. She is so sensuous here with her hair billowing in the wind and her shapely frame accentuated by the stuning black attire. Preetam finds her breathtakingly beautiful and Anita cannot make much about the storm in her heart. A lovely song this is.
Madhubala is extremely bubbly in this film. She adds bounce to the playful Thandi hawa kaali ghata. Foolish initially, she makes her Anita a very strong woman once faced with life's real situations. She soon realises that there is immense strength in the sanctimonious relation called marriage. In the scene where she confronts her aunt, she convinces one and all that she is a changed woman, with a mind of her own.
Guru Dutt produced these films (Mr & Mrs 55, Jaal, Baaz and Aar Paar)to accumulate enough money to make films that he believed in. But, that didn't mean he sacrificed his inherent personality for portraying lighter characters. In fact, in this film, too he is a struggler, but with an ability to laugh at his sorry state. He sees his struggle with the eye of a cartoonist. His clothes are in disarray but he makes a joke of it. He is the same cynic, but garbs his penury in a funny light. He is unemployed, but has no qualms in borrowing money from Johny. In fact, quite unabashedly says, "Arey yaar de dena kuch, baad mein hisaab kar lengey." But, he is not a parasite. There is dignity in his desperation. Why else would he convince his wife that he loves her and diligently try to make her believe so? Why else would he carefully collect the cheques only to hand them back later? Why else would he purposely malign his name and character, thinking that Anita would be happier without him? It's this dignity that triumphs in the end. And, we are left smiling at his quick remarks and his smart plans to save the situation.
Dutt is the same middle-class man in Mr & Mrs 55 as he is in Pyaasa. But, it's the expression that differs here. Pertaining to the light mood of the film, he made sure that the script didn't get bogged down by too much despondency and introspection. His angst here is channelised differently, he smirks at the drudgeries of life and its cruel truths. He keeps visiting the editor of the daily for a job, but smirks when there is no hope. His cartoons are sarcastic and symbolic and his passio 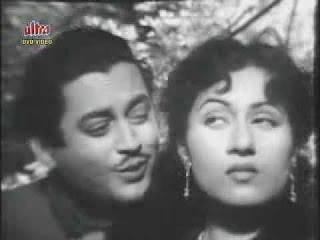 n for Anita is subtle but intense. Dutt lets his eyes do the talking when he looks at Anita. His appreciation is clear when he corners her in his house and tells her that he will bind her in his love so that she can never go. Goosebumps here...
Apart from a few songs, the music of the film somewhat disappoints. For, if you have Nayyar, your expectations are bound to be sky-high. But, after his masterpieces in Aar Paar (another Dutt romance of 1954) Mr & Mrs 55's songs don't make a huge impact. Infact, even the naughty Chal diye banda nawaz lacks the teasing quality that such a number should conjure.
Nevertheless, Dutt, a man of many moods, never ceases to surprise me. Now, I’m all eager for Kalu’s antics in Aar Paar…
Posted by Sharmi Adhikary at 11:46