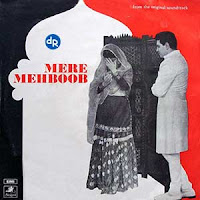 With a blemish-free narrative, a classic projection of vintage Lucknow, a web of some of the most beautiful romantic numbers, a cast that performs immaculately in every frame, Harnam Singh Rawail's Mere Mehboob is now my initiation to a whole new world of charming romance. Yes, I simply got goosebumps in so many parts of the film when Anwar utters those delicate ditties to his beloved Husna. Such beauty and charm this film has! And not just that. All the romance is interwoven with a solid tale of misunderstandings, tweaks and twists that it falls so rightly in place. And yes, that ending could not have been better. What is even more laudable is how the director sticks strictly to the depiction of the old Lucknawi culture and etiquette. The diction, the behaviour, the custom, the costumes and the rituals, everything is so faithful to the original. No wonder this 1963 romance is remembered as one of the best made romances till date. And after enjoying it today afternoon, I can guess why. 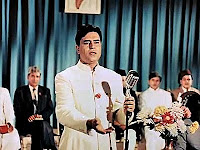 The film opens in a college in Aligarh where Anwar (Rajendra Kumar), a much appreciated poet, is slightly dejected. Needled by his friend Binda (Johny Walker), he reveals that he is yet to meet and talk to the girl he bumped into the other day. Fact is, Anwar is smitten by this lady, her beautiful eyes and her artistic hands. But it is difficult to recognise this girl as she was in purdah (perhaps this was the first time that this Muslim custom of the veil is projected so beautifully in a film). Binda offers a solution. He suggests that Anwar call out for his love in the function where Anwar is supposed to present his song. So, according to Binda, the song that Anwar sings should be laden with a message to this gorgeous lady so that she realises his state and comes to meet him after the function is over. The ground hence, is set for the first song of the film and probably one of the most romantic songs ever created by Naushad. Mere mehboob tujhey meri mohabbat ki kasam is not just a song. It is a poetry (credit to Shakeel Badayuni) that celebrates the yearning of a searching lover. That he is suffering inside could not be more aptly depicted. That the vision of this girl has stolen his peace and calm is evident. Rajendra Kumar's expressions are brilliant here. But what is even more lovely is how Sadhana's visage transforms during the song. It's quite obvious that she is the charmer of Anwar. First she enjoys the praises sung to her. A shy smile escapes her sweet lips, her eyes lower effectively. But slowly this beautiful woman realises how pained Anwar is for not being able to get to her. And she too, starts weeping. Sheer bliss!! 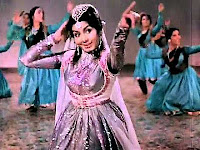 After the song is over Husna (Sadhana... the name could not have been more apt), tries to talk to Anwar but alas, that does not happen. Anwar's love story remains hanging. Soon he has to leave for Lucknow with Binda. There we get to know that his sister, Najma (Nimmi... the popular tale is that Nimmi was offered Sadhana's role initially but she declined it for the sister's role. Thank God she did so. For, Nimmi would not have fitted Husna's shoes as well as Sadhana does) is a theatre dancer and hence she has forbidden Anwar to address her as his sister. Considering that this is 1960s Lucknow, association with a theatre artist would have brought much stigma to a respected person's character. This Najma knows and hence has sacrificed her well-being for the betterment of her brother. She has struggled hard enough so that Anwar be educated. Anwar too recognises the magnanimity of his darling sister. The relation that the siblings share is very special. Najma however is loved by Nawab Buland Akhtar (Ashok Kumar), but since she is into a tainted profession, the Nawab does not think it wise to make Najma his wife. This he feels, would bring slander to his family, one that is highly respected and honoured in Lucknow. 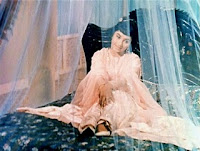 But instead of dwelling too much on the sub plot let's rush to the more exciting main plot of Anwar, and his search for Husna. In the way we have a jolly good song sung by Lata Mangeshkar, picturised on the ebullient Sadhana. Tere pyar mein dildaar is so infectious; I've been humming it since I've heard it. And Sadhana is so lovely in it. I never doubted that she was a natural dancer, but here her dance is coupled with her charming smile and expressions that renders the number even more life and attraction. Husna tells Naseemara (Ameeta looks a bit jaded but she does act very well) that she is also in love with Anwar and is waiting to find him. As luck would have it, Husna's brother, who is the Nawab (everything is so well knitted here), tells Anwar to teach his sister some good poetry, after hearing from Binda that Anwar is a proficient poet. While I sighed in relief that Anwar and Husna would at last meet, the director keeps the suspense alive quite effectively when he starts a game of mistaken identities between Husna, Anwar and Naseemara. But then when the cloud is cleared and Anwar realises that Husna is actually the lover he has been searching for, it is such a joyous feeling after all. And then we have the lovely song by Modh Rafi, Ae husn zara jaag. Those fleeting glances that Anwar and Husna share gives me goosebumps! Not to mention the butterflies in my tummy!! 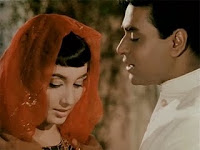 While there is the prospect of a triangular love story, the director cuts it short quite realistically so that the main focus is on Anwar, Husna, and how their love suffer due to the silly constraints of false pride and honour. While they serenade in gardens singing gorgeous love ballads such as Tumse Izhaar-e-haal kar baithey, their is also the tension brewing in terms of Anwar's relation to Najma, Munna Raja's (Pran) leering atrraction towards Husna and the Nawab's rising debts for which he just might have to relinquish his family honour. 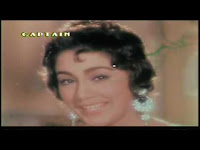 The best part about this film is how the director intertwines several tales together. There is the main tale of Anwar and Husna, the sweet bond between Nawab Buland Akhtar and Najma, the relation between two set of brothers and sisters and of course the sacrificing aspect of both Najma and Naseemara. Despite so many sub plots, never once does the narrative slackens or becomes tedious. This is one film that is interesting and engaging from the very beginning.

Ashok Kumar is a tried and tested actor and a brilliant choice to play the Nawab. Pran is seen in a tiny role but he is very good as usual. Mumtaz Begum for a chance, displays grey shades. Ameeta is a surprise and she is so refreshing. I still feel she should have been a lead actress. Directors failed to exploit her talent. In the song Janeman ek nazar dekh le, you can witness her pain as well as her happiness. She is happy that her best friend is getting engaged to the man she loves and at the same time heartbroken because her love had to die a premature death. She also matches her steps quite well with Sadhana in Mere mehboob mein kya hain (Asha Bhonsle and Lata).
As said before, this is perhaps the first time that I seriously liked rajendra Kumar in a film. Fact is, he looked dapper in those sherwanis, he gave a restrained and controlled performance and he was extremely romantic in the scenes with Sadhana. This Anwar was brilliant and I have no qualms in admitting it. 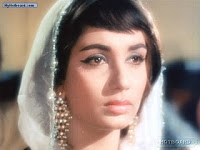 But perhaps, Kumar's performance owes a bit or its brilliance to the beauty of Sadhana. With such a charming and gorgeous lover to love, how can a man not be romantic. She is pristine, pretty, lovely and oh-so-sweet. Her cherubic face and her lithe movements deserve to be praised. She is so breathtakingly beautiful that no man can walk past without succumbing to her charm. And those eyes... stupendously intoxicating!!!
Posted by Sharmi Adhikary at 08:47