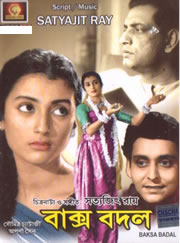 Trust the genius of Satyajit Ray to turn a tiny short story by Bibhutibhushan Bandopadhyay into a two-hour rollicking romance without stretching it to monotony. The writer in him adds certain joyful elements and a unique twist of psychology to make the romance so delectable. The characters are fun, the events absolutely credible, the music just takes the plot forward and the climax of Baksha Badal  is as full of suspense as in a Hitchcock mystery. Yes, trust Satyajit Ray...

We Bengalis, at least the ones who have seen this tidy little gem, always feel that the film is a handiwork of Ray himself. Though the director's credit is given to Nityananda Datta, the film bears those heavy Ray symbols. The characters have a certain intelligence and subtlety that only Ray would suffuse into them. The music (by Ray again) takes us back to the scenes of Samapti, the comedy is smart and fast. The acting is what we would expect from a Ray masterpiece. Perhaps that is why we love to believe that Ray must have ghost-directed Baksha Badal in al1970. If that is untrue, what a sin it is to the merit of Datta. For, he surely did make a brilliant psychological romance...

While young and able psychiatrist Dr Pratulya Bhattacharya (Soumitra Chatterjee) is travelling from Calcutta to Siliguri to visit his elder brother, his suitcase is accidentally exchanged with that of Amita Majumdar (Aparna Dasgupta who we all know as Aparna Sen), a college student, going to Kalimpong with her mother to her maternal uncle's. As guaranteed both parties are extremely irritated by the mishap. But, since both the suitcases have the respective addresses of the owners, the belongings are sent back with due care by both parties. Pratulya finds that his box of sweets is missing from his suitcase. Amita finds that someone has carelessly sketched a mustache on the face of her elder brother whose photograph was present in her suitcase. She is royally irked and impulsively shoots off a curt letter to Pratulya. She makes it known that she has a terrible dislike for mustachios and his childish prank has not been taken too well by her. The letter piques Pratulya's interest in this woman. Since he studies people's minds (he also is the owner of a moustache), he gauges that Amita is a spoilt, egotistic, arrogant and temperamental woman. And, it also helps that Amita is good looking (he was quite struck by her attractive face in the photograph that he tampered with).
The chapter of the switched boxes does not end so easily. Ratna, Pratulya's neighbour and a very sweet girl, pesters him to come and watch their dance drama, Mayar Khela. Initially reluctant, Pratulya jumps at an opportunity to getting to know Amita better when Ratna tells him she is playing the lead protagonist in the drama. He goes to see the play and is obviously smitten by her. Now, Pratulya really has to make his space in her heart, knowing full well that she hates him for the 'box and mustache' episode.
Into the plot comes Sovon (Satindra Bhattacharya), Amita's boyfriend. Though a successful professional, he is always ill-at-ease, low on confidence and is extremely forgetful. He is advised to go and see Pratulya by Amita (is she already finding this psychoanalyst interesting? Why else would she ask her boyfriend to meet this doctor?). On one such meeting Pratulya learns that he is Amita's boyfriend and a near-threat to his romantic quest. So, he pulls up his sleeves and enters the arena for love battle. He crunches numbers, plays with minds and subconscious, takes up the dual role of Pramod Bhattacharya (this Soumitra is oh-so-gorgeous) and saunters into Amita's heart before the girl can even say, "Love". 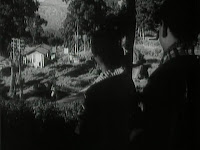 Pramod, in his bid to woo the haughty girl, rushes to Kalimpong to make an inroad via a feigned liking for orchids. Yes, Pramod shaves off his mustache, dresses up in natty gears and nicely makes himself comfortable in the company of Amita, her mother and her maternal uncle (Charuprakash Ghosh), a retired Botany professor. Amita is instantly attracted to this stranger by the strength of his words, his strapping personality and his charm. If she was dillydallying in the case of Sovon, she is now sure that she will not be happy with him anymore. After all, he will not be able to reason with her unpredictable nature, her mood swings that operates with the speed of lightening and her attitude that is far from conformist. Sovon is a simple man with simple desires. Perhaps, a girl like Ratna would make him more happy.
So, Amita and Sovon grow apart. But the circumstances that distance them are hilarious. Watch Pratulya butter Amita's ego while he also crushes her fake pride as Pramod. He is making this woman his own by arresting her attention with his own inimitable charisma. Amita will soon be head-over-heels in love with this handsome hunk. What a way to fall in love! And what an exciting and unique proposal! 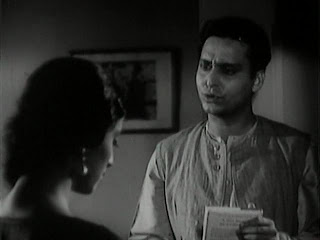 Aparna Sen, I think, is a much better director. Her histrionics are a bit flat. She does play the rich, modern and spoilt Amita but there is a certain stiffness in her performance that is a bit jarring. She is indulged by all in her family and she sometimes does appear very disturbingly vain. She was really young when she starred in this film. Perhaps, she needed more practise before the camera. I wonder how Moushumi Chatterjee would have been for the role?
The film is heavy with special moments. The scenes in Kalimpong are lovely. The comedy, mostly situational, is so pleasurable. There is one uncle who keeps seeing spots before his eyes. And even after Pratulya has treated him to recovery, he keeps seeing them for reasons he knows not of. Incredible!!!
The best part of this 1970 romance is Soumitra Chatterjee. He is a smooth slayer of the hearts!! Initially a serious and successful psychiatrist, his transition to a love-struck young man pursuing his beloved is so striking. But he is not singing and dancing and being loud. His personality always has an air of sobriety. He is refined and educated and always resorts to reasoning. He knows he has an advantage over everybody because he is the mind-reader here. But he never misuses his power. He is strapping and smart. In short, the best Freudian lover for the sometimes silly Amita.
Posted by Sharmi Adhikary at 02:45